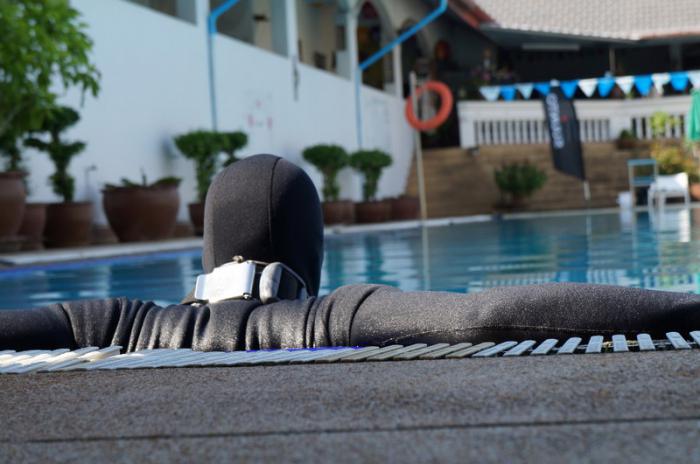 PHUKET: The Dynamic Without Fins (DNF) event at the We Freedive Suunto Series saw two red cards as contestants pushed to cover as much horizontal distance as possible in the Association Internationale pour le Developpement de l’Apnee (AIDA) event.

Malaysian champion Azam Hamid, who holds records in several other freediving disciplines, crossed the marker for the Malaysia National record at 81 meters, but ended up being handed a red card by AIDA judges Sarah Whitcher and Richard Wonka for airway obstruction after he surfaced.

“Azam’s red card [for breaching competition safety protocols] was a good reminder to listen to the body,” said Mr Wonka. “Azam could have beaten that [81m], but wanted too much at once. Had he come up at 82m, I think he would have been fine.”

Phuket dive instructor and mermaid, Melanie Long, made her first showing in a DNF event, and was rewarded with a white card.

“I was feeling good to begin with when I did my practice run, but as soon as I got into the competition lane I could feel my heart beating out of my chest. I dunno why, maybe just the pressure of a competition – like doing an exam,” Ms Long said.

The big swim, however, went to American Walter Johnson.

“It felt like a very friendly get-together, with good results that showed that it’s clean dives that make a successful competition.”

“We’ve got the first two white cards counting towards the grand prize in December, too, so I’m very happy with how things went.”

We Freedive Suunto Series sponsored by, Suunto, SpecialFins and Dive Supply, will continue on April 19.

Those wanting to participate in the event can register at wefreedive.org