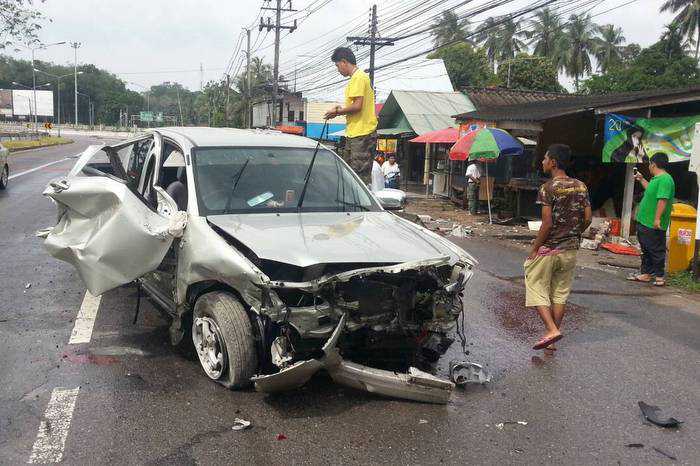 PHUKET: Two men in a pick-up truck sustained minor head injuries after the driver lost control on a wet Phuket highway and slammed into a local shop on the side of the road.

The driver, 62-year-old Somsak Jamjan, and his co-worker in the passenger seat, who police have yet to publicly identify, were travelling southbound on Thepkrasattri Road when Mr Somsak lost control of the vehicle on the notoriously deadly Baan Ko En curve.

“I was driving from Tai Muang in Phang Nga on my way to Patong with my co-worker,” Mr Somsak told police.

“It was raining and I lost control on the wet road as I went around the curve. I hit the concrete barriers on the side of the road before I crashed into the shop.

“I do not remember how fast I was driving, but I was in a hurry to get to Patong.”

The two men were sent to Thalang Hospital for initial treatment. The passenger was then transferred to Vachira Phuket Hospital for further treatment to his head wounds, Lt Thanom Thongpan of the Tah Chat Chai Police told the Phuket Gazette.

“We will question the passenger for more information about the accident once he has recovered.”

“Driving in the rain takes much more concentration, as wet roads can be very dangerous. Please be aware of your speed,” he said.