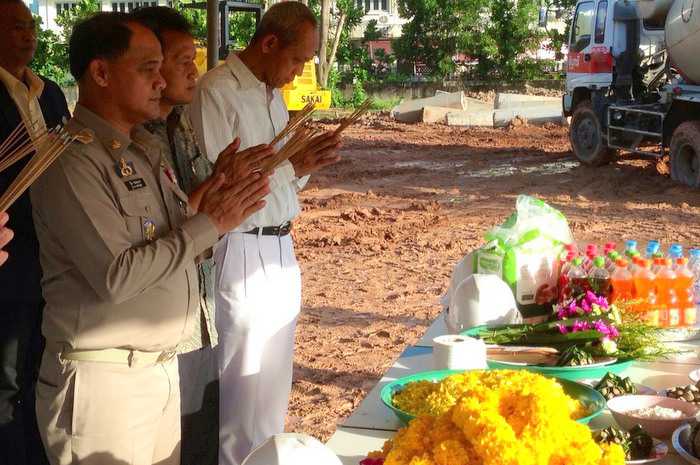 PHUKET: Governor Nisit Jansomwong has given his stamp of approval to the new 449-million-baht Phuket Provincial Hall, hoping that its traditional Sino-Portuguese design will impress visitors.

The governor recently made merit at the construction site, located on a 50-rai plot on Phang Muang Sai Kor, opposite Suan Luang (Rama IX or King’s Park) in Phuket Town, and participated in a blessing ceremony featuring 10,000 fireworks.

“The Sino-Portuguese style is part of Phuket’s identity, and always fascinates visitors. I hope to see all of Phuket’s government offices housed in buildings of this style in the future,” said Gov Nisit.

“I was glad to hear that the new building for the Region 8 Court of Appeals [planned to be built alongside the new Provincial Hall] will also be built with a similar Sino-Portuguese design.”

Construction of the new Provincial Hall is expected to be completed by the middle of 2017, Gov Nisit said.

The contract period for construction is 995 days. Construction has only just begun, but is already ahead of schedule, he added.

The original plans for the new seat of provincial government included a seven-story building, complete with rooftop helipad (story here).

However, protests by more than 200 Phuket residents last year derailed plans to build the new facility at Sanaam Chai, the field across the road from the current Provincial Hall, which is more than 100 years old (story here).