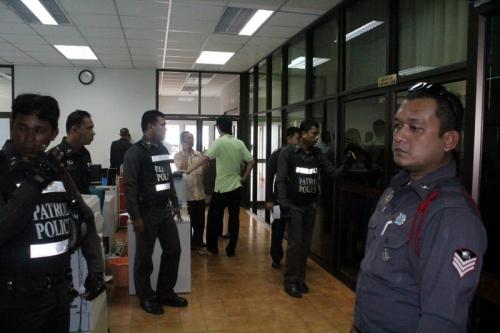 PHUKET: A real estate loan gone sour ended in the stabbing deaths of the borrower and the lender in the conference room of a bank in Phuket Town early this afternoon.

Police arrived at the scene to find both men dead from multiple stab wounds, one with the knife stuck in his chest.

Phonthakorn Teerabenjakul, 51, had borrowed 30.8 million baht from Piboon Vachwanichsanong, 71, using as collateral the title to a piece of land he owned on which an apartment building was being constructed, said Phuket City Police Superintendent Sermphan Sirikong.

“Mr Phonthakorn had agreed to pay back the loan on June 5, but was unable to do so,” Col Sermphan said. “The men had tried to reach an agreement already, but could not.”

They came to the bank to try again with the help of the bank manager.

“The plan was to sell the property to two women who were interested in buying it for 38 million baht,” Col Sermphan said.

Police believe that the conflict concerned the 7.2 million baht profit the sale would bring.

The two men, the buyers and Bank of Ayudhya branch manager Sophon Udomsab met at midday in the business loan section of the bank. Mr Phonthakorn and Mr Piboon negotiated, but couldn’t reach an agreement. Mr Sophon excused himself to let the two men continue their discussion.

“After Mr Sophon left the room, Mr Phonthakorn, who was very tense, jumped up with a knife in his hand and stabbed Mr Piboon,” said Col Sermphan. “When the two buyers saw what was happening, they ran for their lives.”

The meeting room had a glass wall, and staffers were outside, but police have struggled to find witnesses as everyone fled at the sight of the violence, said Col Sermphan.

Once it was quiet in the room, staff went back in and found both men lying face up on the floor in a pool of blood.

When police examined the bodies they found Mr Piboon with stab wounds in his neck and on his right leg, armpit and forearm.

Mr Phonthakorn had seven wounds on his body, and the knife he had attacked Mr Piboon with was stuck in his chest.

“There was no CCTV in the meeting room,” Col Sermphan said.