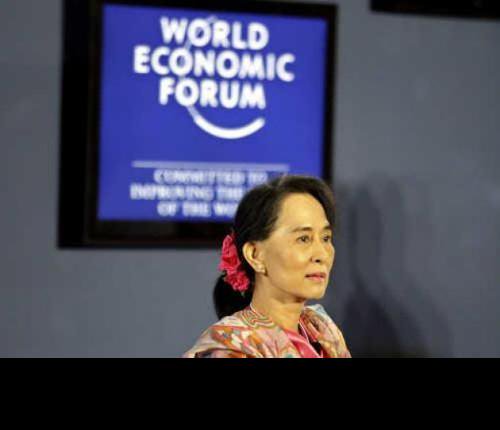 PHUKET: As in Bangkok last year, Myanmar’s democracy advocate Aung San Suu Kyi was in the spotlight when over 900 participants gathered for the biggest international event the country has hosted in decades.

Participants at the World Economic Forum on East Asia 2013 formed long queues to enter the Shan Room at the Myanmar International Convention Centre, where the 1991 Nobel Peace Prize winner appeared along with a minister and an activist to express their views on the future of Myanmar.

The participants were lined-up for about 20 minutes before the session began. Minutes after the doors were opened, the hall was packed with over 400 attendees, some of them standing throughout the one-hour session on “Myanmar: What Future?” An executive from a major oil company was among the participants in line, though another session on energy was being held in another room at the same time. Even WEF founder Karl Schwab had to squeeze in.

“Myanmar’s politics is as important as economics. I want to know what will happen in 2015,” said the executive, referring to the presidential election.

Appearing in a purple dress, Aung San Suu Kyi touched on key issues of concern to the international community. There, as head of the National League for Democracy (NLD), she stated her desire to run for president in 2015. Yet, she pressed for constitutional reforms before that to ensure a free and independent government, greater press freedom, improved human rights protection and greater inclusiveness in the ongoing reforms.

One proposed amendment targets the requirement that for anything to be enacted, it must win votes from 75 per cent of MPs. According to her, only national referendums can beat that.

She said the constitutional amendments are necessary to “establish the rule of law, which is necessary for the reform process”.

“I’d like to be the president. If I say I don’t want to be, I’d not be honest. But not in this situation,” she said. “I believe in the rule of law. It’s the first necessity. The government must ensure the security of the people of Myanmar, regardless of their race.”

Her party plans to unveil its proposal soon to revise the constitution.

Domestic peace and respect for the rule of law have not improved as much as they should have, she indicated.

At the session, President’s Office Minister U Soe Thane stressed that the situation has advanced tremendously.

“In the past two years, we had ideas to change everything, but we needed time to untie the rope that has been tied for 60 years,” the minister said.

Suu Kyi believes that the rule of law would lift the country’s standards for human rights. This includes the granting of citizenship to minorities in the country and the upgrading of human-rights laws to international standards.

The international community should understand that Myanmar has not actually been reformed, she said. This is why she still uses “Burma” as the name for her country, rather than “Myanmar”. The country can’t change simply through a name change and Myanmar still shows intrinsic insincerity, she said.

“Myanmar is literally the form of Burma,” she said, apparently remaining cautious on the reforms. “If many people feel excluded from the transition, there could be reversible situations.”

At the opening session with Suu Kyi in the audience, Myanmar President Thein Sein reaffirmed his will to proceed with the transformation towards democracy.

“We promise that with international participation, this will help Myanmar achieve full success.”

No matter how concerned Suu Kyi sounded, only five hands were raised when the audience was asked who remained pessimistic about Myanmar’s future. The optimism was rooted as firmly as global attention to the democracy advocate. Photographers waited outside the room along with a crowd, waiting to catch a glimpse of her.

PHUKET: Governments linked to former prime minister Thaksin Shinawatra have inflicted cumulative losses of almost 400 billion baht on the country through the pledging schemes for rice and other farm crops, and the current government is responsible for a loss of up to 260bn as at the end of May.

The Finance Ministry’s Post-Audit Committee on the Rice Pledging Scheme revealed yesterday that the government of Prime Minister Yingluck Shinawatra had overspent the budget for the rice-pledging project – 661.22 billion, well in excess of the 500 billion earmarked for the project.

The panel urged the government to release its rice stockpiles soon to bring revenue into the project.

The Democrat coalition led by Abhisit Vejjajiva came to power in late 2008. During its time in power, the government abandoned the pledging scheme and adopted a crop-price-insurance policy, which freed the government from the responsibility of stocking the crops.

The Finance Ministry committee reported that as of January 31 this year, the government faced a loss of 220.96bn. The government is estimated to be accumulating a loss of 10 billion a month under the pledging scheme – a cumulative loss of 260 billion by the end of May.

The losses do not take into account depreciation of rice quality in the government stockpiles, which if included, could take the total loss to more than 400 billion, the report said.

If the budgets for the pledging schemes for rice and other crops under all the Thaksin-related governments are tallied, the country’s losses from the subsidy projects would amount to 393.9 billion. These amounts include rice-pledging losses during 2008-09.

The committee said the huge losses from the pledging had resulted from the Commerce Ministry’s failure to achieve its target of releasing rice from the stockpiles and the low selling price.

“The government needs to solve the problem urgently, as its rice-selling plan has not been successful because of the low price. The government has overspent the budget and it will affect the next pledging round,” the committee suggested.

PWO vice president Somsak Vongvattanasan said the organisation was currently holding in its stockpiles about 17 million to 18 million tonnes of rice from the pledging scheme. Of this, o