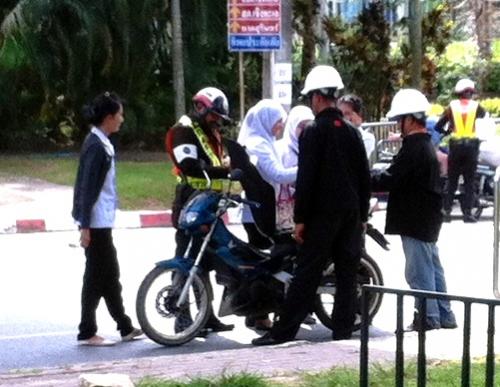 PHUKET: Two people have died on Phuket’s roads within the first 24 hours of the annual Seven Days of Danger new year road-safety campaign, according to the official Department of Disaster Prevention and Mitigation Phuket branch (DDPM-Phuket) statistics issued today.

Yuthapong Taempetch, 37, died after the motorbike he was riding and a pickup truck collided on Kwang Road (see map) in Wichit at 4pm yesterday.

Less than an hour later, Supansa Khamlungtawee, 25, died after the motorbike she was riding and a six-wheeled truck collided in front of a pineapple plantation on Thepkrasattri Road in Moo 9 Tambon Thepkrasattri.

Phuket Governor Maitri Inthusut, on Tuesday, announced that the goal for this year’s campaign was zero deaths.

The DDPM-Phuket, the central office for receiving reports of all accidents, deaths and injuries in Phuket during the seven-day campaign, reported eight accidents so far this holiday period.

Speeding and drivers “cutting in front” of other motorists were listed as the causes of seven of the eight accidents, in which seven people were injured: four in Phuket City, two in Kathu (including Patong) and one in Thalang.

Of those injured were three men and four women; comprising four Thais and three foreigners.

The Phuket Gazette notes that the statics appear to not yet include the Kathu lorry accident yesterday, among other accidents.

The first casualty recorded under the campaign was a 33-year-old woman who crashed her motorbike at high speed on Sakdidet Road in Phuket Town at about 7am yesterday.