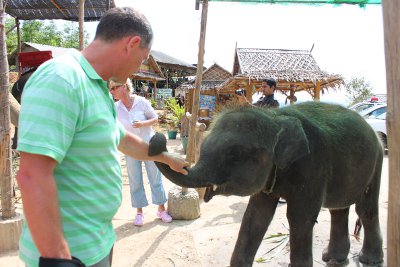 PHUKET: Two baby elephants seized in Phuket today will be sent to an elephant reserve in the Northern Thailand province of Lampang.

Meanwhile, investigators are continuing their probe into whether three elephant camps near Phuket’s Big Buddha image are encroaching on protected forest land.

The transfer of the two baby male elephants – Popeye and Joey – follows officials from Bangkok arriving in Phuket earlier this month to investigate the origins of three baby elephants in Phuket.

This morning, Popeye was seized at the ATV Elephant Camp on the hill to Phuket’s famed Big Buddha image and Joey was taken into custody at an elephant camp near the Laguna complex in Cherng Talay.

Popeye and Joey were found to be the offspring of female elephants seized at the Pang Chang Sai Yok Elephant Park in Kanchanaburi, explained Department of National Parks, Wildlife and Plant Conservation (DNP) officer Tassanes Petkong.

DNP officers raided the Sai Yok camp in January to investigate the 51 elephants being kept there. “The investigating officers found that the camp did not have the correct documents for 19 elephants,” Mr Tassanes said.

All 19 pachyderms were seized by officials to be handed over to the Thai Elephant Conservation Center (TECC), a state-run enterprise in Lampang.

“The baby elephants [Popeye and Joey] will be reunited with their mothers there,” Mr Tassanes said.

Investigations into the Sai Yok camp led officers to learn that three baby elephants were sent to Phuket.

“Another 10 elephants at the Sai Yok Camp are now being held for investigation,” he added.

“They have the correct documents for the baby’s mother, but we are still waiting for DNA tests to confirm whether or not the mother and the baby elephant are related.” said Metee Meechai, director DNP’s Wildlife Preservation Division for Region 5, based in Nakhon Sri Thammarat.

Mr Tassanes said that legal prosecution will left to the local authorities to pursue.

Present at today’s raids were officers from Chalong Police and the Phuket branch of the Tourist Police.

Col Watcharin Phusit, the superintendent of the regional Natural Resources and Environment Crime Suppression Division, earlier reported to the Phuket Gazette that anyone found guilty in the case will get up to four years in jail, a 40,000 baht fine, or both, in accordance with Wildlife Preservation and Protection Act.

Joining the camp raids today were Phuket Forestry Department officers, who seized logs made from protected trees on the mount above the ATV Elephant Camp.

“We also found a backhoe at the site, but we did not find any workers on the hill, so we will work with Chalong Polices to find the suspects,” said Amnard Soikiew, the director of the Forestry Department’s Protection and Suppression Division in Bangkok.

His department is also investigating the land titles for the sites occupied by the ATV camp, Siam Safari and At Hill Adventure Tours.

“According to our investigation, the owner of the ATV camp has only a SorPorKor document [for the land in question], which was issued after the camp was established,” Mr Amnard said.

SorPorKor documents, which are issued by the Forestry Department, bestow the holder the right to use the land for agricultural purposes only.

“Meanwhile, the owners of Siam Safari and At Hill Adventure Tours do not have the right documents to prove they own the land. Their case will be sent to the court, and if they claim the land belongs to them, they can prove it to the court,” Mr Amnard said.

“If they are found to have no rights to the land, they will have to vacate the property,” he said.