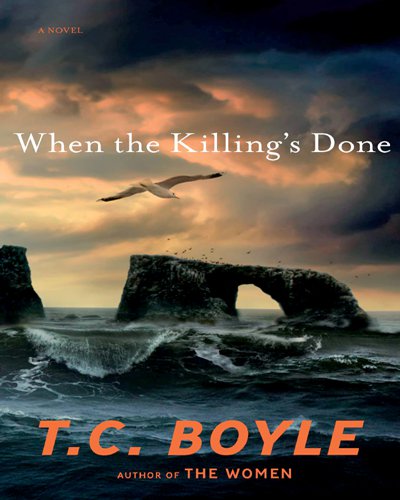 PHUKET: T.C. Boyle is the hardest working man in the literary business. Like the late Aleksandr Solzhenitsyn, he writes seven days a week, and it shows.

He has written 13 novels and nine collections of short stories. His first two novels – Water Music and Budding Prospects – are about the 18th century African explorations of Mungo Park and contemporary marijuana growers in northern California. They rank among the two funniest novels ever written in the English language.

His subsequent novels are biographies of famous figures like John Harvey Kellogg, Frank Lloyd Wright and Alfred Kinsey, or ecological doomsday tracts about the clash of man and nature. They lack the wild humor of his early novels, but are graced with Boyle’s limpid, onrushing, extravagant literary style. Whatever he writes is a good read.

Like many of his novels, his newest takes place in Santa Barbara, California. Specifically, most of the action of When the Killing’s Done (Viking, New York, 2011, 369pp) takes place in the northern Channel Islands, Anacapa and Santa Cruz, called the Galapagos of North America.

The novel opens with a young married couple, Till and Beverly Boyd, on a weekend fishing trip to Anacapa in their newly refurbished cabin cruiser. The year is 1946. Tilden is a veteran of the Pacific War and along for the trip is Warren, Tilden’s ex-Marine brother. The boat sinks in a storm and Boyle’s description of Beverly’s fight against the elements is brilliant and harrowing.

At the time, Beverly was pregnant with her daughter, who would later marry a Japanese American fisherman and have a daughter of her own, Alma Boyd Takesue. She would grow up to become a National Park Service biologist with a mission to eradicate the rats that have overrun Anacapa to the detriment of native species of birds.

In this she is fiercely opposed by the ecological warriors of the Friends for the Protection of Animals (FPA), led by Dave LaJoy, semi-retired owner of four home-entertainment stores and new convert to ecological purity. An irrascible misanthrope, here he is walking down a Santa Barbara street after making a big public scene at his habitual breakfast restaurant:

“He’s walking now, striding along in his business-as-usual gait, forty-two years old and as fit as the gym, Dr Reiser’s Lotensin and blood thinners can make him, ignoring the cars lined up at the light with their wipers clapping and the exhaust coiling out of their tailpipes in the last petrochemical gasp of the black stuff pooled up under layers of shale in Saudi Arabia and Nigeria and Venezuela, the death of the earth, the death of everything, smelling crushed worm, rotting leaf and the wet acidic failure of the newspapers stuck to the sidewalk where the Mexicans tossed them short of the house stoops and storefronts in the grim, desperate hour before dawn.”

You can see how this style will do well to describe the upcoming battles over the next stage of the National Parks campaign: ridding the island of Santa Cruz’s feral pigs. In protest, Dave LaJoy plots of his own infestation of racoons and rattlesnakes.

Oddly enough, the biologist and the protest leader are alike in that they find their only moments of peace amid the solitary beauty of the islands. They share this with their lovers, Alma with Tim Sickafoose, a fellow biologist, and Dave LaJoy with Anise Reed, a Joan Baez-type folksinger who spent four and a half of her early teenage years with her mother Rita, a fellow musician and singer, on an isolated sheep farm on Santa Cruz.
They all love the islands and will fight over them until five lives are lost. In the end, Alma, abandoned by her lover Tim, brings her newborn daughter in celebration to Santa Cruz Island just as Rita is returning to her old sheep ranch to scatter the ashes of her own daughter. Through ancient Indians, Spanish seafarers, Italian vintners, American sheepherders, shipwrecked rats, feral hogs, the Channel Islands abide forever. The novel ends:

“The grass stirs. The moon sinks into the water. Night on Santa Cruz Island, night immemorial.”

The book is available as an e-book at amazon.com or by ordering through all good bookshops in Phuket.

Patong readies for the Phuket Punchline