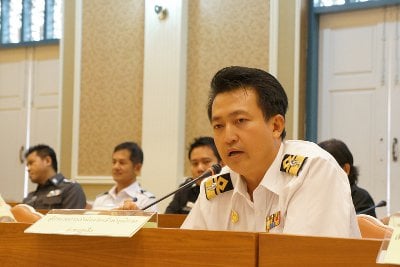 PHUKET: Jet-ski scams, noise pollution in Patong and real estate rip-offs were among the issues raised by honorary consuls during their quarterly meeting with Phuket government officers yesterday.

The meeting, held in the main meeting room of Phuket Provincial Hall, was chaired by Phuket Vice Governor Sommai Prijasilpa.

Dr Sommai, the first-ever person to chair the meeting in English, was filling in for Phuket Governor Tri Augkaradacha, who could not attend due to unspecified urgent business.

The consuls’ meeting was the first to be attended by a member of the United States diplomatic mission in Thailand.

US Consulate-General Elizabeth “Suzie” Pratt told the gathering that although the US uses a different system than most of the other countries and does not have honorary consuls, it still had the safety and security of US nationals in Phuket as its top priority.

Ms Pratt explained that the US uses a system of volunteer “wardens” whose role is similar to that of the honorary consuls in providing assistance to US citizens in distress.

Mr Cunningham asked the new commander if he was aware of jet-ski scams that include operators demanding compensation for pre-existing damage below the water-line that is not visible to the eye when the jet-skis are rented out offshore.

When the renters return the jet-skis to shore they are shown scratches and, in some cases, surrounded by as many as 20 “thugs” who intimidate them into agreeing to pay, Mr Cunningham said.

Maj Gen Chonasit said he was well aware of the situation after discussing it with the Phuket Governor. It was his understanding that the majority of problems came from operators who did not take out insurance on their boats, he said.

Speaking through an interpreter, Maj Gen Chonasit said police “only have the power to enforce the law and look after tourists”, but that they were often called upon to negotiate compensation agreements between renters and operators.

It was the responsibility of the local Marine Department Office to ensure that all jet-skis carried insurance, he said.

Both Mr Cunningham and British Honorary Consul Martin Carpenter raised the issue of uninsured jet-skis operating at both Surin and Laem Singh beaches, where current zoning regulations prohibit their use.

Phuripat Theerakulpisut, Chief of Phuket’s Marine Office 5, told the consuls that the jet-ski insurance scheme had “solved the problem already”, but that there were still some ministerial regulations that were in the process of being amended so that it could be better enforced.

As a practical solution in the short term, Mr Carpenter suggested posting signs at both Surin and Laem Singh Beaches warning tourists of the potential dangers of renting jet-skis there. The suggestion was accepted by Mr Phuripat.

German Honorary Consul Dirk Naumann told the meeting he had received complaints about noise pollution stemming from late-night fireworks in Patong. At least three different groups of German tourists had complained to him that the excessive use of fireworks late into the night had prevented them from sleeping.

Maj Gen Chonasit agreed to tackle the issue, promising action against both vendors and their customers.

Mr Cunningham also asked Maj Gen Chonasit if his predecessor Maj Gen Pekad Tantipong had explained to him the case of an alleged real estate fraud involving two Australians and a Swedish investor who claimed to have lost their life savings when they invested 6 to 14 million baht in a condo project.

Well aware of the matter, Maj Gen Chonasit said that a case against the property firm Modern Architecture and Design Corp had already been forwarded to the Provincial Prosecutor’s Office.

Some of the consuls took the opportunity to thank government officers for swift action in cases involving their nationals.

“I would like to put on record my sincere thanks to Phuket Airport Director Prathuang Sorngkam and to Khun Sumalee Samphaorat, Director of Airport Services , for the wonderful assistance they provided to Australian tourists who were stranded recently as a result of the Air Australia collapse,” Mr Cunningham said.

Mr Carpenter thanked all the relevant agencies who assisted in the identification and repatriation of British national Mark Robson, who was found hanged near Freedom Beach in Karon late last month. Police determined that his death was a suicide.

The meeting ended with Maj Gen Chonasit asking the consuls to submit all queries to him one week in advance so that he could ensure prompt action and thorough replies in future meetings.