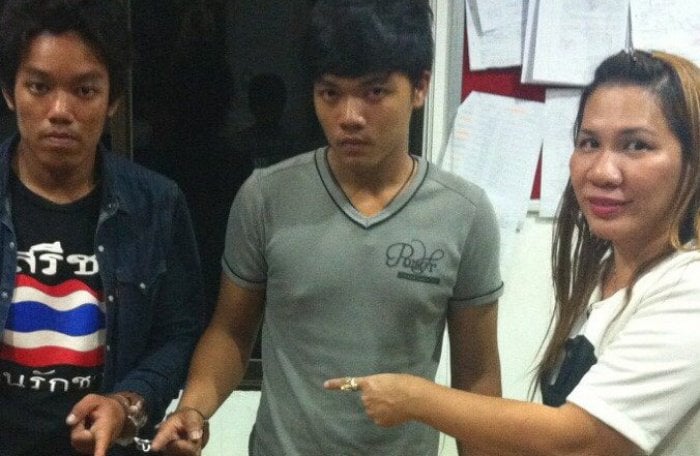 PHUKET: Two men were arrested in Rassada last night for stealing more than 15,000 baht worth of liquor over the weekend.

Puthipong Anuchon, 22, and Thawatchai Wongpiphan, 19, were caught after police used CCTV footage to locate the residence of the bike seen at the robbery.

Thatirat Pongpan, 47, owner of Big One mini-mart near Karon beach, informed police on Saturday morning that ten bottles of alcohol, costing more than 15,000 baht, had been stolen.

“Ms Thatirat closed the shop at midnight. When she re-opened it the next morning, she found signs of a break-in and called the police,” Lt Col Ason Jiraksa of the Karon Police said. “When we arrived, we found that the shop’s door and a window had been broken.”

Police then checked CCTV footage taken inside the shop, which showed the two men stealing the liquor.

“CCTV footage captured in nearby areas show that the two suspects rode a Honda motorbike from Patong to Karon, robbed the shop and then escaped toward Chalong,” Col Ason said.

“While on the way to the house matching the bike’s licence plate, we spotted the two suspects riding past us on the same bike,” Col Ason said. “Mr Puthipong is the nephew of the bike owner.

“We stopped them and showed them pictures of the CCTV footage. They quickly confessed.”

Police said Mr Puthipong admitted this was not the first time he had stolen from the shop, as on June 25 he had shoplifted a bottle of liquor.

When police searched the suspect’s house, they found only five bottles remaining. The suspects explained that they drank the other five bottles with their friends.

The pair have been charged with committing theft at night, using a motor vehicle to commit a crime and damaging property.