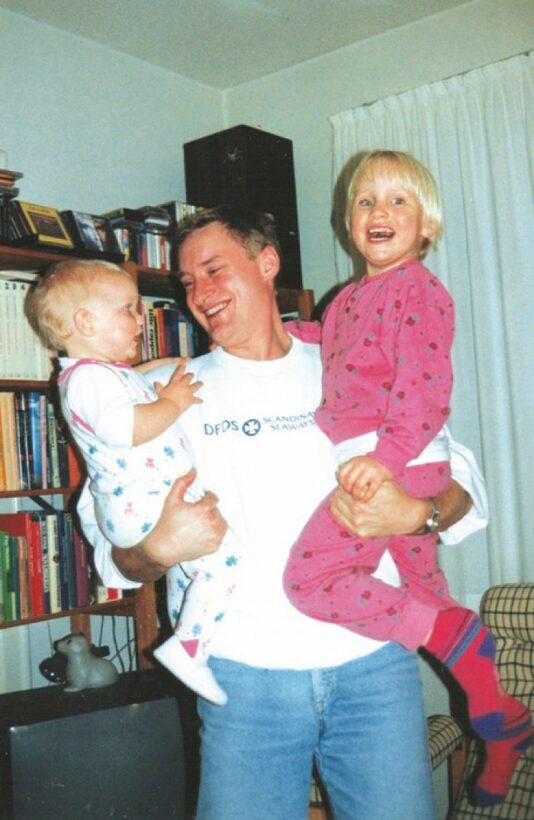 PHUKET: Soren Baisgaard is legally dead. The Danish government laid him to rest after he went missing in Phuket in 1999. However, a single phone call in 2011 in response to a notice issued in the Phuket Gazette by the Danish government reignited the hopes of his deserted wife and two daughters that he was in fact still alive in Phuket, or elsewhere in Thailand.

Even now, the search continues as the family asks anyone who might recognize him to step forward.

In 1999, Mr Baisgaard was confronted at his job as a travel agent in a major company in Denmark for alleged fraud. The same day, he was on a plane to Phuket – a previous holiday destination for him and his family. He checked into room 408 at the Holiday Inn in Patong alone on December 2. After a couple of days at the hotel, Mr Baisgaard extended his stay for three more nights. However, no one saw him after December 5.

Back in Denmark, Lone Eghave Jensen reported her husband missing. He had left behind a ‘good bye’ letter for her and their daughters, stating that he had been caught at work for fraud, and that he was leaving them for good.

Still believing that Mr Baisgaard is alive, Mrs Jensen and her daughters have declined to have the letter published.

“At the time, I thought he was just travelling, as he often did. But it became apparent that he wasn’t coming back, and I started thinking what was wrong with my mom, my sister and me? Why didn’t he want us? I was very upset, we all were. I was a little girl, and my father chose to disappear,” one of Mr Baisgaard’s two daughters, Malene Feldtmann, told the Gazette this week.

“I did not believe [that he died after vanishing from the hotel], and I still don’t. It makes no sense to me, that he should travel all that way to kill himself, and if he died of natural causes, we would have been contacted by the proper authorities.”

Mrs Feldtmann points out that, at this point, it isn’t a ‘sob story’.

“I mean, we want to find him, don’t doubt that. But it’s been 16 years, and my sister and I are adults now. Mostly we want answers. It’s too late to get our dad back.”

Mr Baisgaard left nearly everything behind at the hotel – at first glance it looked like a suicide.

The inventory for room 408 sent by Holiday Inn General Manager Wolfgang Meusburger to the lawyer handling Mr Baisgaard’s case in 2011 was extensive.

In the room safe was Mr Baisgaard’s passport, one dinner card, one master card, a driving licence, and a number of membership cards, as well as kroner and US dollars.

In the closet hung a dark suit, a leather jacket, five shirts, two pairs of pants and a number of other items. Similar general items – such as keys, cigarettes, magazines, gloves, neck tie, cosmetics and so on – were also discovered, as was a book titled Days of Fear: A Firsthand Account of Captivity Under the New Taliban.

There was also a second letter to his daughters, which read: “Dear Malene and Marie. I love you. Dad”.

The one thing missing was four bottles of codeine medicine for Crohn’s disease, from which Mr Baisgaard suffered. However, there was a receipt in the room for the purchase of the medicine from a Patong pharmacy.

Crohn’s is a chronic disease that belongs to a group of conditions known as Inflammatory Bowel Diseases, and can cause serious damage if not properly attended to. Mr Baisgaard underwent surgery for the disease and has at least three scars on his stomach from it.

“As long as he was ‘alive’ he was officially living at Lone’s address and she was not able to have any economic help. She was not able to have him registered as ‘moved away’ without his acceptance. His accounts and his insurances could not be paid and closed as long as he was registered alive,” explained Dorte Jensen, attorney (authorized trustee) for Therkildsen Advokater in Denmark, who was appointed by the court in 2011 to represent Mr Baisgaard during the hearing of the case.

Before Mr Baisgaard could be declared dead, a court summons was placed in the Phuket Gazette.

“There was a phone call to the court that appears to have been from Soren Baisgaard,” Mrs Jensen said. “The employee did not make a note of the phone conversation. Instead she asked the person calling to write an email to the court. The court did not her from the person concerned again, but the court decided that I should try again to find him. No results.”

However, a Danish documentary team has quoted the court employee describing the conversation:

“This is Soren Baisgaard,” the man on the phone tells the court employee. “What do you want? Is this about the fraud case against me?”

“No,” the employee said as she looked up Mr Baisgaard in her files.

“Who is Lone Eghave Jensen?” she asks.

“It is the mother of my two children,” the man said. “Can’t you just leave me alone…”

The call was then terminated from the man’s side.

Despite the call, Mr Baisgaard was declared dead on July 10, 2012. However, the closure that it was supposed to bring to his wife and daughters 12 years late was dashed.

“It [the call] was very confusing. We were about to put an end to the entire thing and start processing the fact that he was dead, at least legally,” Mrs Feldtmann said. “Then someone left that message, and it just started over. It was a very confusing time, and we were very upset with it.”

Now, 15 years after Mr Baisgaard’s disappearance, and about three years after he was declared legally dead, his family continues to hope they will eventually find him.

“Then I want to tell him all the things he has missed in the 16 years he chose not to be here. Because he missed everything, and there were so many times I really wanted my father to be there.

“And lastly I want to tell him that I missed him a lot.”