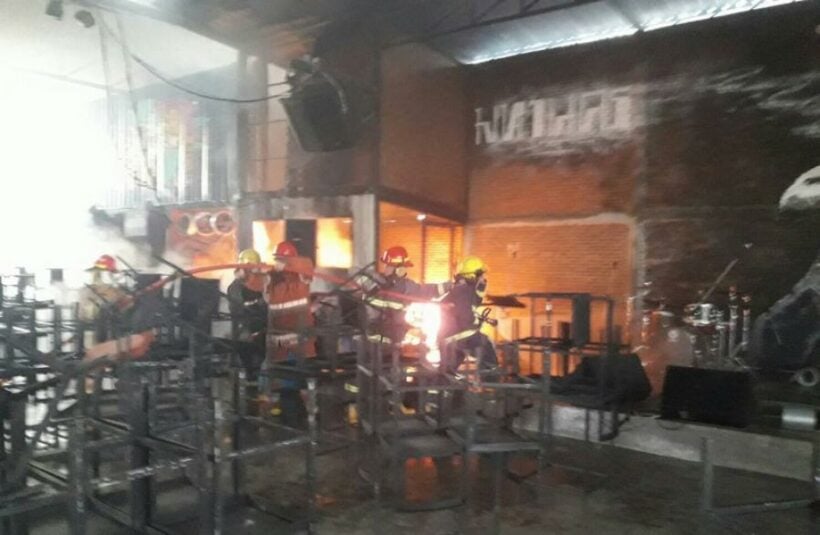 PHUKET: Two fires broke out in Phuket yesterday and early this morning, both of which are believed to have occurred from short circuits. The total damage from the two incidents is estimated at 400,000 baht.

The first fire started at ‘Mahanakorn’, a popular local bar in Phuket Town, at midnight yesterday.

Phuket Disaster Prevention and Mitigation officers, Kusoldharm Foundation rescue workers and firefighters arrived at the scene near Nimit Circle (Seahorse Circle) where the bar is located.

Firefighters brought four fire engines and spent 10 minutes battling the flames. About 300,000 baht worth of damages were caused, including electrical equipment.

“The fire started inside the control room where the DJ keeps his equipment. Most of the devices in the room were damaged,” said Lt Apisit Musikasang of Phuket City Police.

No one was injured and police are still investigating the cause of the fire.

Early this morning, police received reports of another fire at a house in Soi Sapham in Koh Kaew.

Maj Nattaya Supanpong of Phuket City Police said that the house was single-storey and that no one lived inside. It took firefighters about an hour to control the flames.

“The owner of the house, Chaloda Thnitkulsrkorn, told us that she had moved to another house and rarely goes back to the old one,” said Maj Nattaya.

The fire caused an estimated 100,000 baht’s worth of damages. None of the surrounding houses were damaged.

Further investigations into the fires continue.