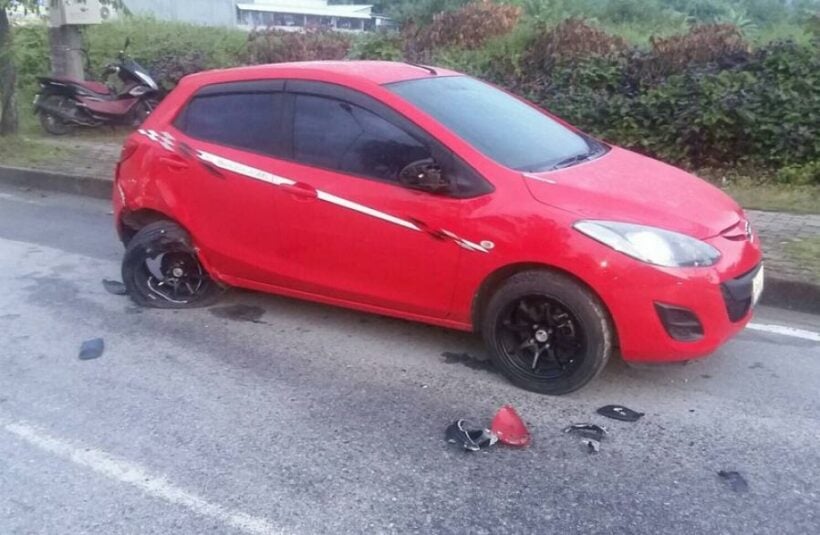 PHUKET: A motorbike rider was killed after he lost control of his bike at a bend in the road and crashed into the back of a parked car in Phuket’s Rassada sub-district early this morning.

“The accident occurred on Thepkrasattri Road northbound. At the scene, we found the victim lying on the road, covered in blood. His Kawasaki motorbike was severely damaged and the car he crashed into was damaged as well,” said Capt Udom Petcharat of Phuket City Police,

The body of the victim, Sermsak Malasri, 29, was taken to Vachira Phuket Hospital for further examination.

“According to witnesses, the biker was travelling at high speed from Phuket Town toward Rajabhat Junction. He couldn’t brake in time and crashed. The impact sent him flying off the bike,” said Capt Udom.

“Mr Sermsak suffered serious head injuries as he wasn’t wearing a helmet. He was pronounced dead at the scene. However, we will check CCTV footage for further details,” he added.

Police warned drivers to ‘be careful’ on the roads, especially during monsoon season.

“Phuket is facing very heavy rain these days and the roads are very slippery. I want to advise all motorists to be more careful and drive slowly. Stop your vehicle on the side if you cannot see clearly enough to drive, and continue when the rain has slowed down a bit,” said Capt Udom.

On Friday, a car crossed over the median on Thepkrasattri Road after ‘losing control’ due to ‘slippery roads’. The driver escaped with minor injuries.

Two Phuket fires cause B400,000 worth of damages