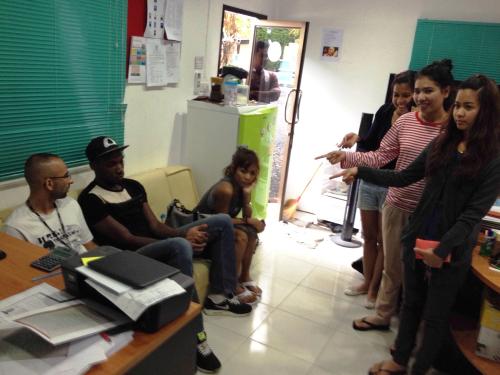 PHUKET: Two Frenchmen and one Thai woman have been arrested after being caught stealing booze and snacks from a local chain of convenience stores in Karon.

The arrests followed reports of three people working together to shoplift at three different outlets of the Bamboo store franchise all on one day – Thursday.

Their modus operandi was to have one of them distract shop staff, while the other two lifted the merchandise.

Yesterday morning, one of the men visited one of the stores that he had allegedly been stealing from, and when the staff recognized him they notified the police.

The cops arrived swiftly and arrested Abdulharim Saad, 35, at the scene of his earlier crime. During questioning, Mr Saad confessed to shoplifting from two other Bamboo stores with the help of Moussa Keita, 19, and Thai national Choojai Traidecha, 26.

Soon after, the police took Mr Saad back to his hotel room at nearby Nanai Soi 8, where they arrested Ms Choojai. Later, Mr Moussa was arrested in another room in the same hotel, where he was hiding and trying to evade the police.

On being arrested, Mr Moussa claimed to be a player for “one of the most famous football clubs in Paris”. However, when the police scoured the internet to verify this claim, they could not find any mention of the “footballer”.

All three are being charged with theft. It is believed that Mr Moussa won’t face any charges for lying about his occupation.