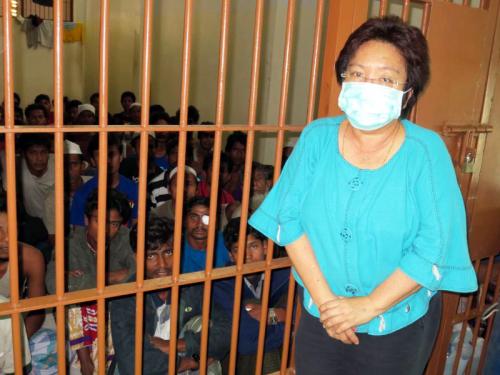 PHUKET: The National Human Rights Commission of Thailand (NHRC) yesterday confirmed that the report on the case of the Royal Thai Navy opening fire on Rohingya refugees off the coast of Ranong in February, will be concluded this month.

The report will be handed over to Prime Minister Yingluck Shinawatra “as soon as possible”, the Phuket Gazette was told.

“Our investigation concerning the allegation of the Royal Thai Navy killing at least two Rohingya will be concluded soon. We’re endeavoring to finish it by the middle of September,” Dr Nirun Phitakwatchara of the National Human Rights Commission of Thailand (NHRC) confirmed to the Gazette.

“We are now working on putting all the evidence and information together in the report that will be handed over to PM Yingluck, in the interests of resolving the whole Rohingya issue in Thailand,” said Dr Nirun.

“In addition to the alleged killings, other issues have been included in the report, including the overcrowded conditions of Rohingya refugees in Thailand’s refugee shelters, the manner in which they are treated, and what country or countries they will eventually be transferred to,” he said.

“It has taken a long time to conclude the report because the Rohingya refugee issue is a big one and has many dimensions. We have sent our staff to a number of locations to collect as much information as possible for our investigation, in order to build up a dossier comprehensive enough to be handed over to the Prime Minister.”

Dr Nirun disclosed that suggestions to solve problems related to the Rohingya-refugee influx will be included in the report, but cautioned that he could not disclose any of these suggestions at present because the investigation is still incomplete.

However, Dr Nirun did clearly state: “We are not trying to interfere with any national authority or apportion blame, especially towards the navy.

“This is not just a national issue, it is a global one. The issue needs to be solved by several government departments working in the same direction.

“Policies need to be made to prepare for the problem we are facing, mindful that many more Rohingya refugees will be arriving on our shores. We don’t want this to become a chronic problem for Thailand.”

Two Frenchmen and a Thai busted for stealing in Karon