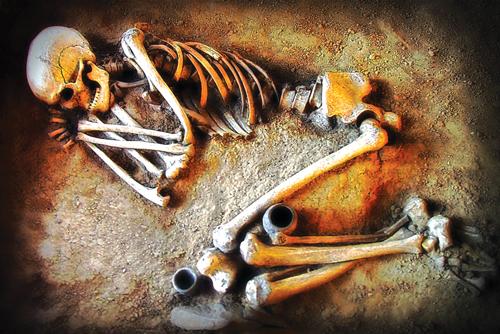 PHUKET: In 1992, a peculiar discovery was made in a village on Phuket Island. Baan Khok-Tanod, situated in Chalong sub-district in the south of Phuket, was the site of the strange discovery when a local company that owned a piece of land in the village decided to dig up the area in order to build a wall around the land.

Not long after, construction had started, however, the crew had to stop abruptly after a chilling discovery was made. The heavy digging had begun to unearth several human skeletons and bones from the ground. It seemed like the construction workers had stumbled upon a mass grave and nobody really knew how long it had been there.

The site of the grave is located very close to Chalong Temple near Bang Yai canal (click here for map). In the old days, Bang Yai was a large and very deep canal. In fact, it was wide enough to accommodate triple-mast ships, which could sail up the canal from the open sea, as far inland as Chalong Temple and the market nearby.

For hundreds of years, the people of Chalong used Bang Yai canal for transportation to other parts of the island and used its freshwater to irrigate their rice fields. It was a time when large canals connected the different districts of Phuket together, making it possible for people to travel from one part of the island to another.

Bang Yai canal flows into Chalong Bay, which used to be a natural harbor for merchant ships that sailed between trading towns like Malacca, Penang, Phuket, Ranong and Takua Pa. Ships on their way to these ports often had to sail past Chalong Bay and often, during the monsoon season, merchant ships would anchor within Chalong Bay and wait for favorable conditions before continuing on their journey.

The district of Chalong also had a sizeable population living by the coast, which meant seafarers could buy their supplies from local villagers before setting sail again.

The skeletons found at Baan Khok Tanod were numerous, yet all buried together in one mass grave. They were buried along with several household items made of bronze, such as betel nut crushers and coins minted during the reign of King Rama V. Also found in the mass grave were several pieces of porcelain, kitchenware and glass bottles with European labels indicating that the wares were made in England and Holland.

Such evidence has led local historians to believe that the mass grave may have been dug to bury European traders who died on the island almost a century ago. According to Prasit Chinakarn, a renowned Phuket historian, these merchants may have come to Phuket to trade in the early 20th century.

In the year 1912, however, a terrible smallpox epidemic spread throughout the Kingdom of Thailand. It took the lives of countless people, Thais and foreigners indiscriminately. Prasit suspected that the mass grave might have been dug to bury the dead European merchants who died during the smallpox outbreak. He speculated that these merchants might have been travelling from Takua Pa to Phuket when some of the crew members got sick and died during the voyage.

As a result, the rest of the surviving crew may have taken a detour and sailed up Bang Yai canal to Baan Khok Tanod in order to bury their dead shipmates before setting sail elsewhere.

The betel sets and tobacco found in the grave suggests that there may have been some Thais buried in there as well. The fact that local Thais were also buried within the mass grave alongside Europeans seems to support the theory that these people may have been victims of a smallpox epidemic. Thais usually cremate their dead.

However, during the smallpox epidemic of 1912, people were succumbing to the plague so fast that it was becoming difficult to cremate all of the dead bodies. In fact, the plague was so frightful that few would voluntarily go near dead bodies that had died from smallpox. Hence they were buried in hastily-dug mass graves such as this one found in Baan Khok Tanod.

Smallpox was a highly infectious airborne disease with a high mortality rate. Outbreaks of smallpox used to be common throughout the history of the island. Another major outbreak of smallpox was documented again in 1943 during the Second World War, when many Japanese soldiers were stationed in Phuket. Each time the epidemic struck, it killed masses of people in the most frightful manner.

Thankfully, the awful disease has been eradicated from the island for over 50 years.

Phuket Retirement: The ‘Use it or lose it’ hypothesis