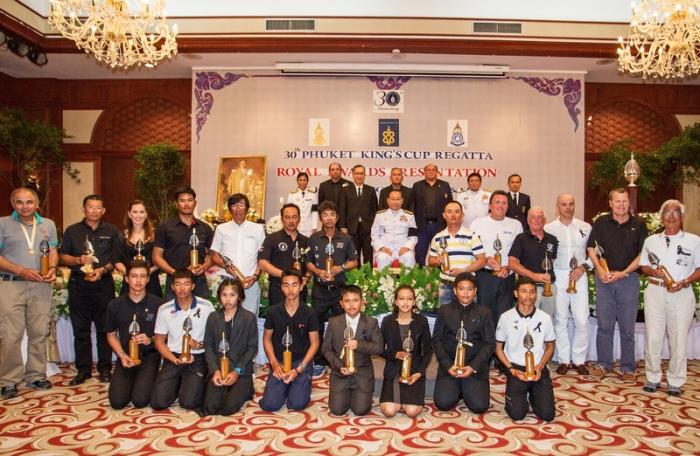 PHUKET: The final day of racing off Kata Beach for the Phuket King’s Cup Regatta on Saturday saw all classes of boats competing in only one race each, making the most of good winds in the afternoon after light conditions earlier in the day.

A royal award ceremony presided over by HE Air Chief Marshal Chalit Pukbhasuk, personal representative of His Majesty the King of Thailand, was held in the evening at Kata Beach Resort & Spa to honor the winners.

The Winning teams were presented with their trophies by Air Chief Marshal Chalit after a highly competitive last day of races, which began with light breezes that stiffened up later in the day.

“Happily today we ended with a true breeze. It really brought the regatta to a close on a good note,” said Race Officer Ross Chisholm on Saturday.

The Thai team in the Platu One Design class were proud winners of CPO.1 class with Wiwat Poonpat and his Royal Thai Navy 1 successfully winning all seven races over the week.

Kevin Whitcraft and THA72 finished six minutes ahead on Saturday and were named overall winners for IRC0.

Japanese team Yasuo Nanamori’s Karasu was victorious in the IRC1 class, fending off a stern challenge from Mandrake III all through the week.

In Premier Class, Ithinai Yingsiri and Pine-Pacific won after a week of solid first and second place performances.

Among the fireflies, John Newnham and Twin Sharks, beat the Royal Malaysian Navy into second place on final standings.

In Open Charter, Vladimir Oleynikov and team Popeye werevictors, whilst compatriots on Snapdragon skippered by IgorGinzburg won Bareboat Charter A.

The Phuket Gazette and The Nation are proud media partners in the King’s Cup since 2006.