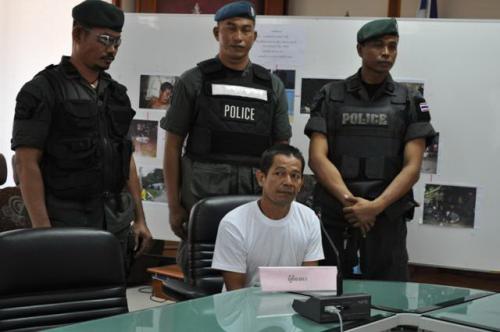 PHUKET: Police have arrested the prime suspect wanted for a triple homicide over a land conflict in Phang Nga.

After nearly three months on the run, Somsak Wongsri, 49, was arrested in Ranong on Tuesday.

He was wanted for the execution of Prajuab Choojit, 24; Sarawut Boonklin, 31; and Somboon Kimtin, 69, who was the father of popular Thai country music singer “Ice R Siam”.

The executions took place in a rubber plantation in Takuapa district on December 22.

“After he killed the three men, he went to Ranong where he was in hiding until he was arrested by police on Tuesday, at 7pm,” Police Region 8 Commander Yongyuth Charoenwanit told a press conference in Surat Thani yesterday.

Somsak was arrested at Ranong’s Saphan Pla Pier, well known among Phuket long-stay tourists and expats as the jump-off point for visa runs to Myanmar.

“He was attempting to leave Thailand,” Lt Gen Yongyuth said.

“He told police in his statement that he was involved in a conflict with the three men over access to his land. The access crossed land belonging to the three men,” Gen Yongyuth explained.

“Somsak has been denied police bail because his actions have been classified as a form of heinous crime,” Gen Yongyuth added.

During the press conference, Ice R-Siam pleaded with Somsak, asking why he killed her father, but Somsak remained silent.

After the press conference, police escorted Somsak to the rubber plantation in Takuapa to re-enact the crime.