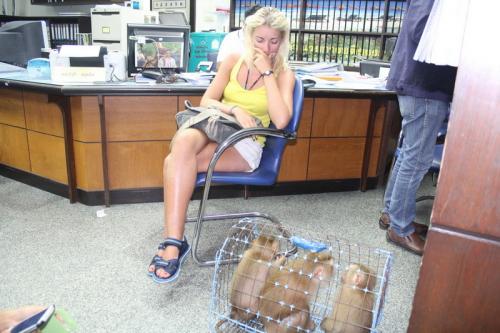 PHUKET: A Russian couple were arrested at a tourist sightseeing island off Phuket yesterday afternoon after they were caught charging tourists to have their photos taken with pig-tailed macaques, a protected species in Thailand.

“We went to Koh Kai Nok and saw Mr Belov and Ms Denisovich carrying three pig-tailed macaques, asking tourists if they wanted to have their photos taken with them,” Col Kongkaj explained.

“We asked to see their passports and documents to prove they were in legal possession of the macaques. They told us they did not have the documents with them, but the documents were back in their rented room in Kata,” he said.

After placing the two Russians in custody, the officers entertained the couple’s claim and escorted them back to Phuket.

“We took them to their room in Kata. They showed us the health record books for each of the three macaques and a document proving the monkeys had been fitted with microchips.

“However, they could not explain to us what information was logged on the microchips. They said they were given the monkeys by a Russian friend.

“They also could not show us any official documents proving that they had the legal right to have the animals in their possession,” he explained.

The couple were held overnight at Phuket City Station and departed for Koh Yao Noi this morning, where they will be charged with possession of a protected species without a permit.

If found guilty, Mr Belov and Ms Denisovich each face a fine of up to 40,000 baht or up to four years imprisonment, or both, Col Kongkaj explained.

“The monkeys will be sent to a wildlife reserve in Phang Nga,” he added.