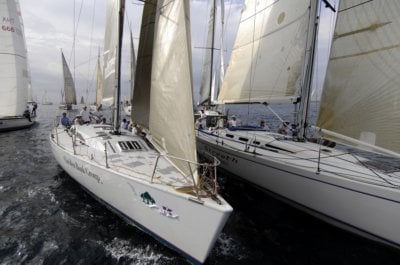 The overall standings were not available at press time, but after Day 2 Pryde was second overall and his first place may have been enough to put him in first place overall and on target for another coveted King’s Cup.

However, fellow Hong Kong resident Nick Burns may spoil Pryde’s plans of adding another trophy to his cabinet after finishing a close second to Pryde his boat Mandrake.

Chinese skipper Adam Ng had his best result so far with his boat Konka Hummingbird finishing a very credible third. A huge contingent of Chinese media is following Konka Hummingbird and sending daily reports of his progress back to the Mainland. They finally have some good news to report.

Also in the hunt for the silverware is Paul Winkelmann’s Island Fling, which didn’t do so well in the tricky light conditions and finished sixth. But Island Fling had been leading overall in the Racing 1 class after the second day’s racing, and at the end of the week skippers can discard one result, so perhaps Winkelmann will be able to drop today’s result.

Only four in the Sports Boat class managed to finish their race today, with another five not making it to the finish line. Former world junior sailing champion Scott Duncanson, a Phuket resident, used his local knowledge to advantage and pulled off a first-place finish on his boat Somtam Express, getting over the line almost two minutes ahead of Vino, another locally-made Phuket 8 boat, skippered by Phil Wardrop.

Japan’s Kenichi Takahashi finished third in the Sports Boat class on another boat designed for Thai waters, the Platu.

Four of the five Firefly 850 catamarans – designed and built in Phuket – finished their race today. Hong Kong publisher Marc Cudennec’s Chi Machine kept a perfect record with another victory to take his record to four winds from four races. Cudennec now has a big lead on the rest of the Firefly fleet and his colorful blue cat is starting to look unbeatable.

Many of the boats in the other classes pulled out early after drifting in the strong tides and light wind. The rain squalls that followed the fleet all day led to one unknown sailor singing over the regatta’s radio frequency I wanna go home.

Tomorrow is a lay day for the regatta’s 1,000-plus sailors and the big contingent of more than 100 media covering the event, and many are expected to travel to PIMEX, the annual Phuket Boat Show, at Phuket Boat Lagoon,