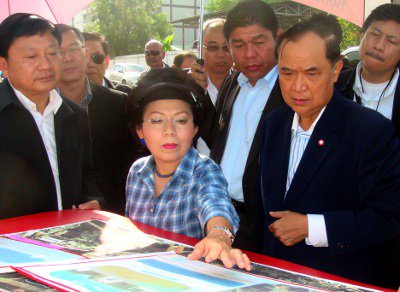 PHUKET: With the Thai Cabinet meeting to be held in Phuket a week away, Transport Minister Jarupong Ruangsuwan in Phuket in person yesterday promised that the 180-million-baht elevated road over a mangrove forest at Saphan Hin will be presented to Cabinet for approval.

In front of the press, Mr Jarupong even guaranteed that the Klong Koh Pee road project will become a reality during Yingluck Shinawatra’s term as prime minister.

“PM Yingluck plans to ‘shower gifts’ on the people of Phuket and the Andaman region by approving many important projects, especially the Klong Koh Pee road project that Phuket people have been waiting for 15 years,” Mr Jarupong said.

“This project will definitely happen within this government. The underpass project at Darasamut intersection will be another present that PM Yingluck wants to give to Phuket people in order to solve the traffic problem,” he added.

The Klong Koh Pee elevated road is expected to alleviate inbound traffic from the south of the island into Phuket Town. The project was strongly supported by Wichai Phraisa-ngop during his term as Phuket Governor. Mr Wichai is now a senator.

The project, to be carried out by the Department Of Rural Roads, will see a 600-meter four-lane road traversing a “bridge” three meters high and 510 meters long. The road is to include a bicycle lane and pedestrian walkway.

All mangrove forests in Thailand are protected areas. To build anything on or over a mangrove forest must receive special dispensation from Cabinet on the condition that the project is of exceptional “public benefit” justifying the need to do so.

Joining Mr Jarupong yesterday was Prapat Chongsanguan, a former Governor of Bangkok’s Mass Rapid Transit Authority who is now the assistant to the transport minister.

Afterward, the delegation retired to Phuket Provincial Hall to discuss other major infrastructure projects that are either already under way or currently under consideration that will presented to Cabinet fir funding approval.

“We need to improve Phuket Airport to be able to handle 12.5 million people a year. Currently, Phuket Airport can handle 6.5 million tourists a year. We will need to increase the number of bays for large aircraft from 15 to 25, and add another 30 bays for smaller aircraft. The project will be completed in 2013,” said Mr Jarupong.

“The cargo building, airplane maintenance building and the new international terminal will be finished by April 2014. The renovation of the existing domestic terminal will be complete by early 2015. We will also conduct a study on how to make Phuket Airport’s runway be able to handle 25 flights per hour,” he added.

Mr Jarupong also rattled off a long list projects that are likely to have a significant effect on Phuket’s development.

“Transportation links between the airport and Phuket Town as well as other tourist attractions will also be developed, along with a light-rail train project around Phuket island,” he said.

“The Deep Sea Port will be upgraded to accommodate two large cruise liners and Chalong Pier will be developed under the budget of 200 million baht to be the one-stop service point and only port in Phuket for yachts sailing in and out of Phuket,” Mr Jarupong said.

While discussions were focused on sea links, the Phuket Marine Office proposed a marine traffic control center with satellite and radar be set up under a project costing 20 million baht.

Department Of Rural Roads Director-General Chatchai Thipsunaree added, “We will improve the Kathu – Nakoh road that leads 13 kilometers to the Kathu Mining Museum. The project will be done by June 2012. For the Klong Koh Pee road project, we will propose that project to the Cabinet for permission to build the bridge over the mangrove forest.

“We are also carrying out an environmental-impact study on the shortcut between Chalong to Patong. It’s a five-kilometer road starting from the Luang Pu Supha Temple in Chalong. Once the study has been completed, we will propose the project to Cabinet to ask permission to build the road through protected forest there,” he added.

Mr Prapat, Assistant to the Transport Minister, returned the discussion back to what he called Phuket’s two “dream” projects: the light-rail network and the Patong Tunnel.

“The two projects are really big projects and they need foreign investors to build them. We will have to discuss more about the two projects. If the two projects really happen, we will use Phuket as a model for mega-project investment in other major tourist towns,” Mr Prapat said.