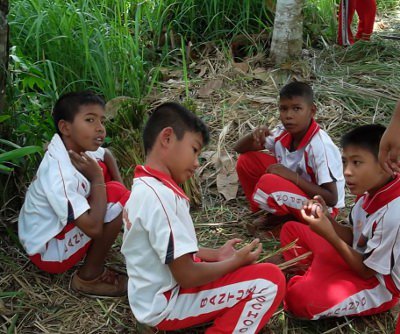 Three of the children – aged 9, 10 and 12 – were taken to hospital for treatment for multiple bees stings, said School Director Bussakorn Hohkul.

“Doctors had to inject antihistamine in one of the boys because he was stung around his right eye,” he said.

Fortunately, none of the other children were seriously injured.

“It was about 9:30 in the morning and the kids were just studying as usual when the wild bees came flying from nowhere into the classrooms,” said Director Bussakorn.

“The kids were scared. They panicked and ran out of the rooms. About 20 children were stung by the bees,” she said.

A search of the school grounds has not revealed where the bees came from.

“We searched for beehives in the school and the surrounding area, but we have yet to find any.

We presume the bees came from the jungle because some of the local people go looking for wild honey, and to get it they hit the beehives they find,” Director Bussakorn.