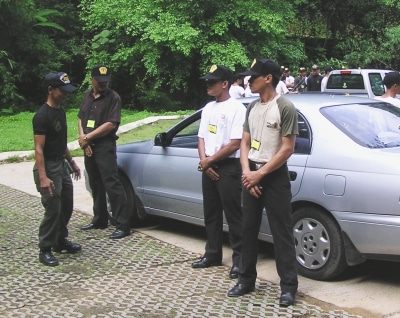 THALANG: Ninety new volunteer police officers have taken part in two days of training during which they learned the rudiments of martial arts along with topics including providing security for VIPs and dealing with sensitive situations such as bomb threats.

The 90 men who have volunteered to support the province’s 400 paid, full-time officers gathered at the Khao Pra Taew Wildlife Conservation Development and Extension Centre, Thalang.

Volunteers get paid for their efforts – but only around 2,000 baht per month.. They wear uniforms similar to those of conventional police officers, but do not carry firearms.

They work closely with full-time officers. Their main duties so far have been to watch out for signs of crime in their neighborhoods and to help provide security for visiting VIPs.

The training session was organised in response to the tsunami and the continuing unrest in the deep south.

The OrBorJor plans to recruit 90 more volunteer officers, although no timetable has been set for this.

He said, “They help to ease the workload of full-time police. As we have only around 400 full-time officers in Phuket, we really appreciate what the volunteers are doing.”