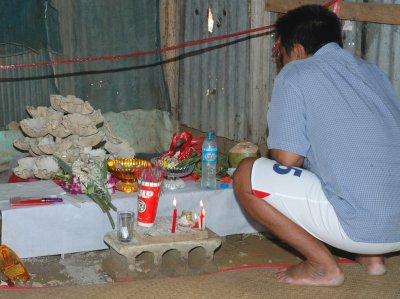 RAWAI: Hundreds of people have been making their way to a small house in Village 6 to see a clump of enormous, white mushrooms that sprang up there on Visaka Bucha Day and which is thought by many villagers to be a harbinger of good luck.

Homeowner Suwan “Prachuap” Phungkung, a fortune-teller by trade, told the Gazette she discovered the mushrooms growing out of the dirt beneath three sheets of linoleum in an old storage shed in front of her house at 182/12 Soi Naya.

The 51-year-old told the Gazette that she returned to Rawai from her native Trang on the evening of May 21. As she slept that night, she dreamt that an old couple came to her to ask her to tell their fortunes.

“At first I told them I was too bored, but finally I gave in. But when I went to tell their fortunes, I couldn’t find the white linen sheet I needed to lay the fortune-telling cards on. That frightened me, and I woke up,” she explained.

The next morning she noticed her white cat Songsee behaving strangely and pawing at something beneath some sheets of linoleum in the shed. Afraid it might be a snake, she used a stick to ease back the linoleum. As she did, she uncovered the huge mushroom, which had over 25 “ears” set in three tiers and bore a striking resemblance to a coral formation.

K. Suwan considered the appearance of the mushroom of Visaka Bucha Day to be auspicious, so she immediately lit joss sticks and set up a small shrine with fruit and flower offerings.

Word travels fast in a Thai village, and before long visitors from near and far were coming to pay their respects to the unusual fungus. Many of them hoped that a close inspection of the mushroom would somehow convey to them the winning numbers in the upcoming lottery draw.

Counts of the number of individual ears have varied, some seeing 27 and others 29. Both of these numbers proved popular with people playing the two- and three-digit government lottery.

As for K. Suwan the fortune-teller, she said she seldom plays the lottery.

“I neither expect nor am interested in deriving any financial gain from this good thing that has happened at my home.

“All I ask is that it will bring happiness to my family,” she said, adding that anyone who was interested in seeing the mushroom was welcome to come by and pay their respects.

“Everyone who comes says it is the most beautiful mushroom they have ever seen,” she added.

As more and more people began to arrive, vendors began to set up stalls selling souvenirs and refreshments.

K. Suwan told the Gazette this morning that last night a “coral princess” came to her and expressed dissatisfaction with so many people coming to use the mushroom as a souce of lottery numbers.

“She was sad,” K. Suwan said, “that people didn’t correctly interpret the mushroom as a sign that people should be more careful in protecting Phuket’s natural resources.”