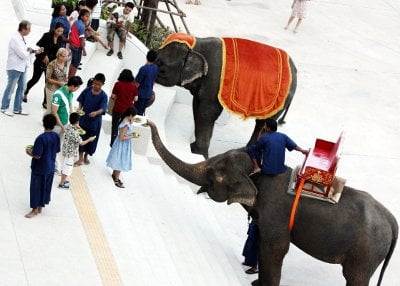 PHUKET: Two young elephants were approved to work in Phuket this week, bringing the total number of registered pachyderms on the island to 190, which is 14 more than the existing limit set by the Provincial Office in 2003.

The increase in the number of elephants beyond the set limit was noted during the meeting by Phuket Provincial Livestock Chief Weerasit Phutthipairote.

“Since any elephant brought onto the island has to be approved by our committee first, I think things will be okay,” V/Gov Somkiet said.

“The examination [of the elephant identification papers and future living conditions] will continue to be strict,” he added.

The two new female elephants, Pooklook, 5, and Thida,10, will be performing at the Siam Niramit theater along with two other elephants already owned by the company.

The committee approved the elephants based on a review of their identification papers, which confirmed they were born in captivity and not taken from the wild. The committee also took into account several other factors about the elephants’ future living conditions.

Pooklook and Thida are currently at Dream World amusement park in Bangkok, owned by the same parent company.

They will be transferred to Phuket as soon as the Livestock Office has approved all the necessary documents, explained Santi Paengnukroh of Siam Niramit.

“It’s a typical issue of the moment. Any issues involving animals seem to be of no concern to government officials,” he said.

“I don’t remember exactly why they came to this 176 elephant limit, but I think it was because there was too much competition going on at the time and the animal welfare standards were pretty bad for the elephants as a result. If that’s the rule, they should live up to the rule or change the rule. They are just stepping over their rules on the spur of the moment, always coming up with an excuse.”

The Dutchman said he was unaware of any legal cases brought against parties who had elephants seized in during inspections on the island in January or February this year.

“All of the cases were settled, which is outrageous…I can only say from an animal welfare point of view that if these animals surpass 190 in number, how can officials ensure that their living standards will be okay?” he asked.

As for the documentation process, he said it was almost impossible to tell with certainty from identification papers if baby elephants were actually born in captivity or captured in the wild because the process does not involve DNA information.

Asked about the effectiveness of microchips, he said:

“Microchips can easily be taken out, either when the elephant is dead or when you don’t want it anymore. It’s just that simple. It’s like a license plate on a car. You can just take the screws out and put it on another car. If you don’t have the chassis number, you can drive a stolen car forever. So the chassis number is the DNA of the elephant, and the microchip is the license plate,” he said.

His own efforts to establish a more watertight system of ID cards, as is already in place in many countries, have so far found little resonance with Thai officialdom, he said.

However he expects such a system to be introduced by the government itself in a few years time, probably before the next CITES conference to be hosted in Thailand in 2013.
Mr Wiek said he plans to meet soon with Democrat Party officials interested in animal welfare laws.

In the shorter term, he is preparing to defend himself in a Petchburi Court against charges of “assisting in crime” brought against him by the Department of National Parks.

The case followed a complaint by DNP Director-General Damrong Phidet, who said that he should be charged with “assisting in a crime” following a highly-publicized raid of the WFFT sanctuary in Phetchburi.

Mr Wiek views the raid and subsequent charges against him as a vendetta for an expose about the trade in baby elephants that led to the inspections early this year.

He said the charges were outrageous because he currently is not a member of the WFFT board, of which his Thai wife is chairperson.

He added that his own wife is so fed up with the DNP-WFFT dispute that she has asked for a two-week vacation to the Netherlands “just to get away from Thailand for awhile”.

Toyota races back to Phuket