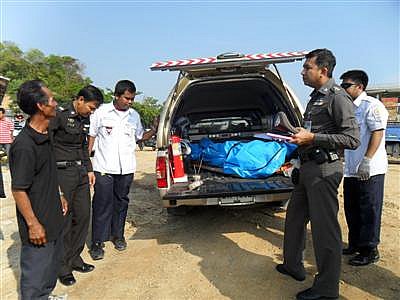 PHUKET: Rescue workers have recovered the body of a young man who died in an apparent jet-ski accident off Phuket over the weekend.

Mr Pakpien was on an extended family holiday, staying with his elder sister on Koh Rang, off the east coast of Phuket.

Sien Pakpien, the victim’s father, said his son borrowed his sister’s jet-ski and quickly developed a great enthusiasm for riding it offshore and around the small island.

His family grew concerned when he failed to return after several hours on Sunday.

Setting out to look for him around 4pm, they found the damaged jet-ski about 100 meters offshore – but there was no sign of Mr Pakpien.

A two-day search that included divers failed to find the body. It was finally spotted by a local fisherman this morning near a rocky bluff known as Hode Hin.

Kusoldharm Foundation workers recovered the body and returned it to the main island at Laem Hin Pier, from where it was transferred to Vachira Phuket Hospital.

An examination of the body revealed Mr Pakpien suffered a major head injury.

Police assume that he suffered an accident that caused his head to hit the jet-ski, which knocked him unconscious. He then fell into the water and drowned.

The family have accepted his death as an accident and will not pursue any criminal charges in relation to his death, police said.

Developing Phuket: Calls for yet another major public hospital