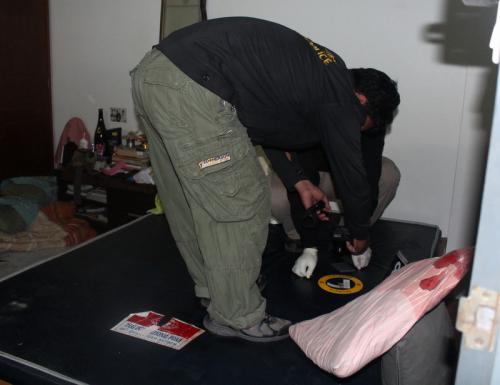 PHUKET: A Phuket Tourist Police officer has been kicked off the force as the prosecutor moves forward in charging him over a double-homicide in a drug-den shootout in March.

Pinchai Piyadilok, 34 at the time of the shooting, lost a leg as a result of wounds sustained in the gun battle that left Saran Chaithum, 26, and Chalermpol Tripuk, 26, dead (story here).

However, the only bullets and casings found at the scene, an apartment littered with kratom leaves near Phuket Rajabhat University, were fired from Mr Pinchai’s gun, according to the Phuket Forensics Office.

“We have conducted a fair case, and not protected this officer just because he was on the force. If police break the law, then they too will go through the legal process like everyone else,” said Phuket City Police chief Sermphan Sirikong.

“Now the case is out of our hands; I cannot give you any more details,” Col Sermphan told the Phuket Gazette.

While being treated for gunshot wounds to his stomach and leg at Prince of Songkla University Hospital in Haad Yai, Mr Pinchai’s leg was amputated. After being discharged from the hospital he was allowed to return, on bail, to his home in Chumphon.

Mr Pinchai denies the charges against him but has declined to give any statement to police, Col Sermphan said.

Natthapong Kaewkuanchum, the only other survivor found in the apartment, has also been discharged from hospital after receiving treatment for three gunshots to the chest. He too refuses to give a statement to police.

“Both parties have the right to remain silent. Anything that needs to be said can be said in court,” Col Sermphan said.