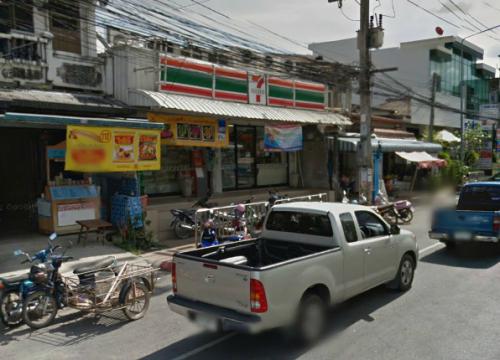 PHUKET: Traffic police in Thalang today confirmed that they will crack down on motorists congesting the roadways around 7-Elevens and other small convenience stores in the Phuket district within the coming weeks.

“In the next two weeks, my team and I will talk to branch managers at 7-Elevens and other small convenience stores, and ask them to announce to their customers not to park too close to the road or block the entrances of streets and driveways,” Thalang Police Deputy Superintendent Sarawut Meeboon told the Phuket Gazette.

Lt Col Sarawut noted that many of these stores are located on the corners of small side streets, creating the opportunity for careless parkers to both block access to the side streets and congest traffic on main roads.

“I understand that some selfish customers are only thinking of what is easiest for themselves and ignoring the needs of other road users,” he said.

Managers will be requested to have their staff keep an eye on the situation and to inform customers when a vehicle needs to be moved to prevent a dangerous situation on the road.

“They need to come out of the store and tell them to move their cars,” Col Sarawut said.

“We really need help from both convenience store staffers and road users, because we only have a few officers and cannot stay vigilant around-the-clock,” he added.

“If the problem continues, I will send officers out during rush hours and we will arrest and fine anyone who is putting other road users in danger with their parking,” he said.