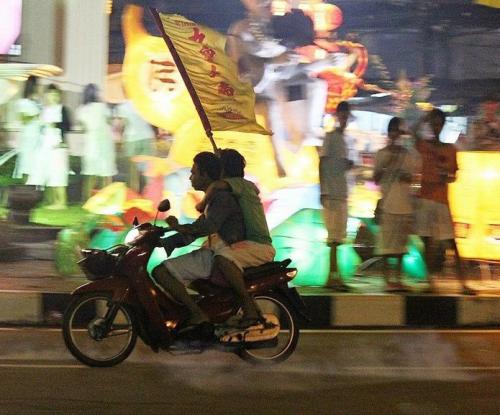 PHUKET: Phuket City Police say they have arrested at least 13 teenagers for endangering people by throwing firecrackers into the dense crowds lining the streets for the Vegetarian Festival, now in the sixth day of this annual nine-day event.

“The purpose of firecrackers is to honor spirits during certain cultural and religious events; any other use will result – and has resulted – in arrests,” Col Sermpan said.

The penalty for using firecrackers in a manner deemed to be a nuisance is a fine of 1,000 baht.

News of the arrests follows numerous complaints about misuse of firecrackers, usually by giggling teenage boys. The complaints were filed with the Phuket Tourism Association.

“We had received too many complaints of firecrackers being chucked from motorbikes by teenaged delinquents during the early days of the festival. Their actions frighten and annoy people and often cause serious injuries,” said the Association’s vice president, Bhuritt Maswongssa.