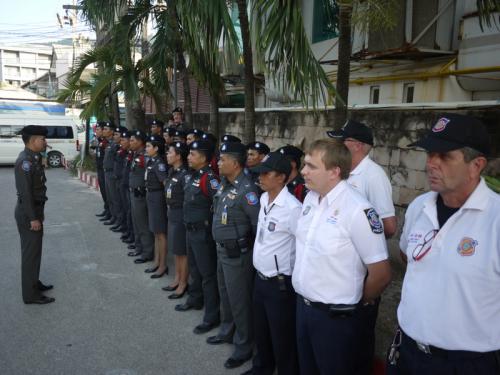 The visit followed Qin Jian, Vice Consul of the Consulate-General of the People’s Republic of China, in Songkhla, filing a complaint to the Phuket Damrongtham Center (provincial ombudsman’s office) about Chinese tourists being scammed by jet-ski operators.

In the complaint, Mr Qin relayed concerns from Chinese tourists that jet-ski operators were outrageously overcharging for repairs to damaged jet-skis.

Nucha Petchvimol, deputy president of the Phuket Jet-Ski Association, explained to the general, “The jet-skis suffer extensive damage in accidents. Anytime an accident happens, we have three different repair specialists provide estimates of how much the repairs will cost in front of the tourists who were involved in the accident.

“The insurance company will pay for damages up to 50,000 baht, but if the repairs cost more than that, the tourists must pay the rest,” Mr Nucha said.

“This is about the insurance coverage. We are not asking for any money from the tourists,” he added.

“We instruct every tourist how to ride a jet-ski, what to do if an accident occurs, and what insurance coverage there is. Every time the tourist must sign the rental agreement to accept that they understand the conditions,” he said.

The operators have instruction leaflets, with images, written in Thai, English and Russian – but not Chinese. “We are working on the Chinese version,” he told the Phuket Gazette.

“However [a recent case] is now finished. The Chinese tourists have already paid the 100,000 baht for damages,” he added.

Mr Nucha explained that in the accident that sparked the complaint, the jet-ski was damaged beyond repair.

“The jet-ski struck a yacht. The damage was so bad that the jet-ski can longer be used. The operator will have to buy new one,” he said.

Satisfied with the explanation, Maj Gen Roy said, “The jet-ski operators provide a good service to tourists. Instructions are handed out to every tourist who rents one. However, I suggested they add Chinese to the instruction leaflets. It would be very helpful to prevent any misunderstandings.”

Gen Roy and his team of officers then continued their tour of Patong Beach, handing out tourist information leaflets as they strolled along the sand.