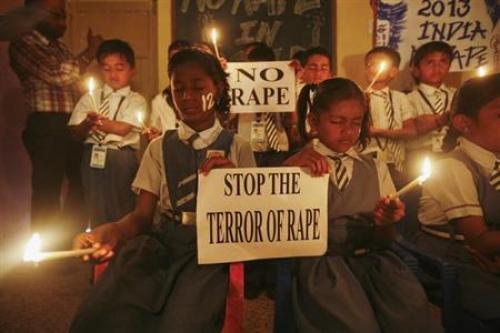 PHUKET: Four men raped a 39-year-old Swiss woman camping with her husband in an Indian forest, police said yesterday, turning the spotlight anew on the security of women in the world’s largest democracy.

The attack on Friday night in the central state of Madhya Pradesh comes three months after a 23-year-old physiotherapy student was gang-raped and beaten in a moving bus and thrown bleeding on to the street in a case that sparked outrage in the country. She died later in hospital in Singapore.

One woman is raped every 20 minutes in India, according to the National Crime Records Bureau. But police estimate only four out of 10 rapes are reported, largely due to victims’ fear of being shamed by their families and communities.

The Swiss woman and her husband were touring the state by bicycle and were camping overnight in the forest.

Seven men attacked the couple in their tent and four of them raped the woman, Dilip Arya, deputy inspector general of police, told Reuters. They also stole their valuables.

The woman has since been discharged from hospital, he added. No arrests have been made.

After the physiotherapy student was raped and beaten in Delhi last December (click here for report), millions of Indians took to the streets demanding the death penalty for her attackers and official action to reduce the number of assaults on women.

Four men and a juvenile are on trial for that attack. A sixth defendant, who police say was the ringleader, was found dead in his cell on Monday.