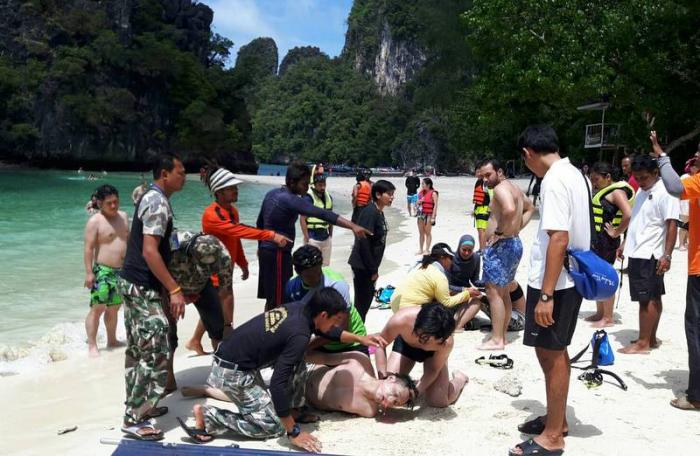 KRABI: A Chinese tourist is recovering in the Intensive Care Unit (ICU) at Krabi Hospital after nearly drowning while snorkelling near Koh Hong yesterday morning.

“At the scene, we found Chinese national Guobiao Guangdong, 26, in a very serious condition. He was choking after breathing in water, so officers applied first aid and then rushed him to hospital, where he was admitted in the ICU,” said Jampen Pormpakdee, chief of the Koh Hong protection zone.

The tour guide told officers that the incident occurred while Mr Guangdong was snorkelling.

“There were a total of 10 tourists in the tour group and they were snorkelling in shallow water, about one meter deep. We were alerted to the situation when someone shouted for help after finding that Mr Guangdong was in trouble,” said Mr Jampen.

“I think Mr Guangdong breathed in water because he did not know how to use the snorkelling equipment very well. It was very lucky that the officers and tour guide were there to help,” he added.

Mr Guangdong was reportedly on a six-day trip to Thailand with his sister.

“To avoid any such issues in the future, we again emphasize that tour guides provide tourists with instructions about how to use the snorkelling equipment before letting them go into the water,” said Mr Jampen.