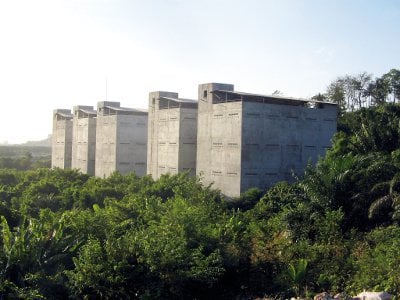 Having caused problems in other regions of Thailand, the growing number of swiftlet barns in Phuket came under scrutiny at Phuket Provincial Hall last week. Officials have decided to set up ‘zones’ for the business – despite the fact that it is illegal. The Phuket Gazette‘s Stephen Fein and Warisa Temram report.

PHUKET: The Phuket Provincial Office will establish “swiftlet ranching zones” on the island following complaints that flocks of the birds that cough up the key ingredient for birds’ nest soup are creating a public nuisance and health hazard.

Following a complaint filed with the province by the Phuket Chamber of Commerce (PCC), Phuket Vice Governor Somkiet Sangkaosutthirak last Wednesday chaired a meeting on the issue at Phuket Provincial Hall.

The PCC, represented at the meeting by their secretary Surachai Chaiyawat, complained that unregulated growth in the swiftlet ranching industry was harming tourism-related businesses on the island.

Driven by demand from the growing number of Chinese tourists to Phuket, restaurants specializing in bird’s nest soup have sprung up all over the island – some large enough to accommodate many bus loads full of tourists in one sitting.

Bird’s nest soup has been a delicacy in China for over 400 years, largely due to the belief that eating it strengthens the cardiopulmonary system, increases metabolism, can cure the common cold – and even serves as an aphrodisiac. Tour operators specializing in the inbound Chinese market are well aware of Phang Nga Bay’s reputation as an important source of the key ingredient for the soup.

Some of the larger restaurants that specialize in the dish – such as the PP Bird Nest Ltd Company Restaurant at Saphan Hin and another large new establishment on Chao Fa West Road in Wichit – also serve as sort of museums, explaining how the nests can be collected from high up in the limestone cliffs on islands around Phang Nga Bay.

The reality of how the bird’s nests are sourced nowadays is somewhat different, however.

The organized theft of bird nests is a good way to lead any avian species down the path to extinction. As a way of conserving the local white-nest swiftlet (Aerodramus fuciphagus) population, the government has long offered private concessions to selected nesting sites on state land, such as in the Phang Nga Bay National Marine Park.

However, actual control of natural swiftlet nesting areas in the south of Thailand has led to violent confrontations and even murder in the past, with many “influential figures” allegedly involved. The conflict surrounding these nesting sites is mostly due to the price of the nests, which can fetch thousands of US dollars in the prime export markets of Hong Kong and the United States of America.

An officer from the Phuket Provincial Livestock Office told the Gazette after the meeting that rearing swiftlets is clearly unlawful.

“People rearing swiftlets in Phuket are doing so illegally, because the bird is a protected species. Apart from the laws created and upheld by Livestock Department, there are numerous regulations from a variety of government agencies in place that restrict this activity,” he said.

“For example, if you apply for a building permit for your home, then modify the structure to serve as a swiftlet barn, that’s illegal. It is a zoning issue regulated by the Public Works and Town and Country Planning office,” he said.

The Ministry of Public Health also has regulations about swiftlet rearing, because the birds cause noise pollution, air pollution and can carry diseases.

V/Gov Somkiet told the meeting the birds can vector at least 11 different diseases to humans.

Since swiftlet rearing is illegal, there isn’t a single license issued for this activity in Phuket, the source said.

Despite this, the reality on the ground – and also in the air – is that the business is booming and more and more people want to be a part of it.

Not all such investors are in remote, coastal areas. In October, one woman was given 15 days to remove a new structure built for swiftlets on the fourth floor of her commercial building, located in a densely settled area on Montri Road, across the street from the PCC office in the heart of Phuket Town.

Those at the meeting agreed that it would be more realistic to zone the activity, keeping aviaries away from densely-settled areas and other locales where they might cause a nuisance, than to try to enforce existing regulations.

To this effect, the Phuket Provincial Office assigned local government administrative bodies (OrBorTor and municipalities) to inspect all swiftlet aviaries in their jurisdictions as a first step in creating zones where the business would be tolerated.

“Phuket will create swiftlet aviary zones, after which time all illegal aviaries [outside designated zones] will be pulled down by Treasury Office officials in Phuket. At this point, OrBorTor must inspect and record how many aviaries are in their areas of control and make sure they are located in areas where they will not bother anyone. Until the zones are determined, those making a living from raising swiftlets will be allowed to continue,” V/Gov Somkiet said.

“There are very few swallow aviaries in Phuket. Most are at Laem Nga on Koh Sireh and in Nabon [in Chalong],” he added.

To see how people living near the aviaries were affected by them, the Gazette visited the new National Housing Authority project off Rassadanusorn Road in Rassada.

Building 7 of the 16-block complex sits about 100 meters away from one of the largest swiftlet aviaries on the island, which also abuts the popular Pak Nam Seafood Restaurant on Rassadanuson Road.

When the Gazette arrived, the mechanical squealing of artificially-produced swiftlet calls was clearly audible from speakers mounted at the nearby complex of five swiftlet barns. The calls are used to attract swiftlets, which nest in colonies.

Building 7 resident Sopon Maros, 27, said the bird calls fill the air from dawn until about 9am every morning, then again for an hour around dusk.

“It doesn’t really bother me, but other people in this building complain about it,” he said.

A manager at Pak Nam Seafood explained to the Gazette that the bird calls were directed out toward Phang Nga Bay and were hardly audible to their diners. The restaurant had no problem with the aviaries, which were built about two years after the restaurant opened, he said.

However, PCC Secretary Mr Surachai said that without zoning future conflict with resorts and restaurants was inevitable in Phuket.

The owner of a Nissan dealership in Surat Thani and Suzuki motorbike showroom in Phuket, Mr Surachai said other parts of the south have already been negatively affected.

“Parts of the coastal district of Pak Phanang in Nakhon Sri Thammarat are now so overrun with swiftlet barns that the people who used to live in these areas had been forced to move away,” he said.

The biggest threat was the fact that the birds can carry diseases including avian flu, he said.

“What if there were an outbreak and the Public Health Ministry had to declare a quarantine? The publicity would badly da