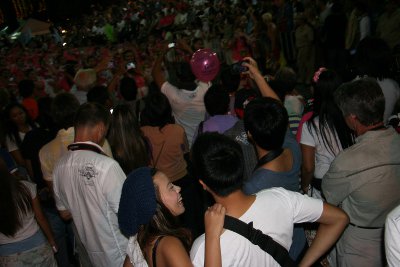 PHUKET: The annual Patong Carnival is Phuket’s top free funfair according to a recent readers’ poll by the Phuket Gazette.

The two-week poll, launched late last month, asked readers, “Which of the following annually-staged free events do you most enjoy?”

The Old Phuket Town Festival ranked second with 16.2% of the votes, followed by the Phuket Vegetarian Festival, which scored 12.6% of the votes.

Thai nationals who took part in the poll were divided in their top choice, with Patong Carnival and the Old Phuket Town Festival each scoring 33% of the votes, followed closely by the Phuket Vegetarian Festival (29%).

Local foreign residents were more decisive in declaring Patong’s week-long party as their top choice, at 64% of votes, followed by the Old Phuket Town Festival (16%) and the Phuket Vegetarian Festival (10%).

The Gazette‘s latest poll asks readers: “Which of the following topics are you most tired of hearing foreigners in Phuket complain about?”

To vote in the new poll click here or on the “vote” icon on the right of this page.

Have an idea for a poll? Contact us with your suggestions.

To expand your views, leave a comment in the Readers’ Forum below.