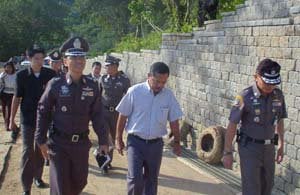 PHUKET TOWN: Chamnan Pachantabutr, former owner of the land on which the Samsara luxury property development is currently being constructed, was arrested today for his alleged part in falsifying a land document – the original title for the Samsara site. Chamnan, who is one of the owners of the Phuket Cabana Resort and of the Kan Eang restaurants in Chalong, was arrested, according to police, after his car was stopped near the Thainaan restaurant early this afternoon. He was taken to Phuket Town Police Station where he was met by Pol Maj Gen Pansiri Prapawat, who is in charge of investigators looking into Phuket’s various land scandals. Gen Pansiri informed Chamnan of the charge and explained that he would be taken to Bangkok tomorrow morning for questioning by the Crime Suppression Division. Chamnan made no comment. Gen Pansiri, with Chamnan in tow, visited the Samsara site later in the day. “We brought Chamnan here today so that he can show us which land was sold to Pacific Villa Co [PVC],” he explained.” PVC is the owner of the project. The general explained that on Sunday the Criminal Court in Bangkok issued arrest warrants for three people, Chamnan and two former Land Office officials – Thawatchai Anukul, formerly registrar of the Phuket Provincial Land Office, and Uru Thipthep of the Kathu District Land Office. Thawatchai is being sought by police but so far has not been found. However, Gen Pansiri said that he believed Thawatchai was still in Thailand because Immigration Police have been instructed to ensure that he does not leave the country. Uru is currently in the Bangkok Phuket Hospital with heart problems, though it is understood that he will probably be released tomorrow and will be taken immediately into police custody. The deed for the Samsara land was one of the titles on a list issued on June 28 by the Land Department in Bangkok when it called for the arrest warrants to be issued. In its call for the arrests, the Land Department described the original Samsara title as a “flying SorKor 1” – a deed registered using an illegal technique whereby the paperwork from one piece of land is altered so that it appears to cover another piece of land. A spokeman for Asia Island Homes, which is managing the development of Samsara, declined comment when contacted by the Gazette today.