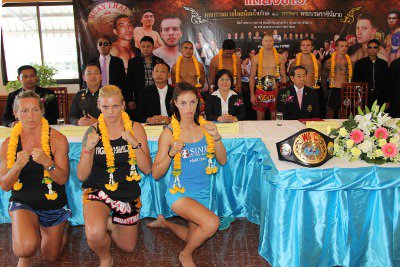 The event starts at 5pm and will be held at Bangla Boxing Stadium in Patong, which has a capacity of 3,000 people.

“The main objective of the event is to honor HM Queen Sirikit, as well as to promote Thai martial arts to the world. This match is special, because the female boxers will compete for the Queen’s Cup,” said event organizer Piya Issaramalai.

The Queen’s Cup trophy is similar to the King’s Cup for football, but will be given in the name of Queen Sirikit to a female Muay Thai champion at the end of the event.

All the profits raised from the event will be given to the Patong Police to help them promote tourist safety in the Patong area, explained Mr Piya.

The professional matches will comprise six weight classes, with amateurs taking to the ring afterward, around 8pm.

In the 118-pound WMC female class, “Sunantha Rawai Muay Thai” from Finland will square up against “Tanyakorn Sor Tammajak” from Thailand.

In the 154-pound WMC male class “Charlie Sing Patong” from England will take on “Rolex Dragon Muay Thai” from Thailand.

The third match will see “Nong Nan Jor Nguan Gym” from Thailand step into the ring against “Clair Tiger Muay Thai” from Luxembourg for the 153-pound WMC female class.

In the fourth match, “Wanmarilo Gaewsamrit” from Spain and “Munggonepetch Dragon Muay Thai” from Thailand go toe-to-toe for the 135-pound WMC male class.

The fifth match is the 112-pound WMC female class between “Kwanjai Pabaijaturat” from Thailand and “Teresa Sinbi Muay Thai” from Sweden.

The final professional match of the evening will be in the 147-pound WMC male class between “Jerry Sinbi Muay Thai” from England and “Tracy Tiger Muay Thai” from New Zealand.

“We are holding this to honor Queen Sirikit, and it will be an event to remember,” said WMC President Chjetta Thanajaro.

“I would like to see Muay Thai have a greater presence in the international community, so one day it can be included in the Olympic games,” he added.