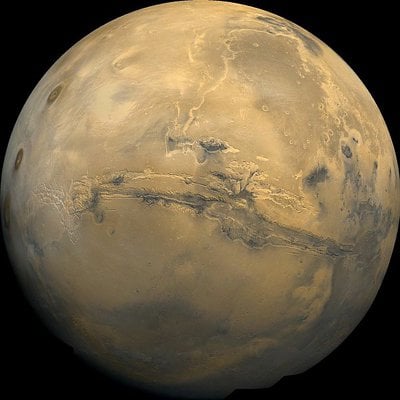 PHUKET: A California scientist has discovered that Mars has at least two plate tectonics, contrary to popular belief that the Red Planet is too small, and its interior too cold, to host plate tectonic processes, his University announced yesterday.

An Yin, a planetary geologist and professor of Earth and space sciences at the University of California – Los Angeles (UCLA), has been studying the surface of Mars for years and recently analyzed about 100 satellite images taken by NASA’s THEMIS spacecraft and the HiRISE camera on NASA’s Mars Reconnaissance Orbiter.

Yin said he found a very smooth, flat side of a canyon wall which can only be generated by a fault and a steep cliff comparable to cliffs in California’s Death Valley, which are also generated by a fault. The Red Planet has a linear volcanic zone, which is a typical product of plate tectonics.

But the surface of Mars is also home to Valles Marineris, a system of canyons that runs along the Martian surface and is more than 4,000 kilometers long, making it one of the largest canyons in the Solar System. Scientists have long been in disagreement about how the canyons formed, but Yin said his new evidence shows Mars has at least two plate tectonics which are divided by Valles Marineris.

Yin said the two plate tectonics have moved approximately 150km horizontally relative to each other. He pointed out that California’s San Andreas Fault, which is over the intersection of two plates, has moved about twice as much – but they are comparable because Earth is about twice the size of Mars.

The planetary geologist, who refers to the two plate tectonics as Valles Marineris North and Valles Marineris South, said the small size of Mars may explain why there are only two plates. “Earth has a very broken ‘egg shell,’ so its surface has many plates; Mars’ is slightly broken and may be on the way to becoming very broken, except its pace is very slow due to its small size and, thus, less thermal energy to drive it,” he explained.

The discovery of plate tectonics also suggests the Red Planet may experience so-called “marsquakes”, and this adds further support to evidence released earlier this year that a powerful marsquake hit the Cerberus region of the planet in recent history. “I think the fault is probably still active, but not every day. It wakes up every once in a while, over a very long duration – perhaps every million years or more,” Yin said.

Earlier this year, earthquake geologist Gerald Roberts at Birkbeck, an institution of the University of London, said there is evidence that our planetary neighbor may have experienced marsquakes in the recent past. He and his team also analyzed imagery from HiRISE and examined boulders along a fault system known as Cerberus Fossae, which cuts across a lava surface on Mars.

Roberts said the images showed boulders that ranged from 2 to 20 meters (6.5 to 65 feet) in diameter, which had fallen in avalanches from cliffs. The size and number of boulders decreased over a radius of 100kms (62 miles) centered at a point along the Cerberus Fossae faults.

“This is consistent with the hypothesis that boulders had been mobilized by ground-shaking, and that the severity of the ground-shaking decreased away from the epicenters of marsquakes,” Roberts said in February. He estimated that the magnitude of the marsquakes may have been greater than 7 on the Richter scale.

The scientists said the marsquake likely happened in recent history, within the last few per cent of the Red Planet’s 4.5 billion year history, but it is impossible to say exactly when. The British scientists said it is possible that large magnitude quake activity is still occurring on Mars, but it will be difficult to tell until seismographs are taken to Mars.

For Yin, there is still more work to do, as he is unsure how far beneath the surface the two plates are located. “I don’t quite understand why the plates are moving with such a large magnitude or what the rate of movement is; maybe Mars has a different form of plate tectonics,” he said. “The rate is much slower than on Earth.”