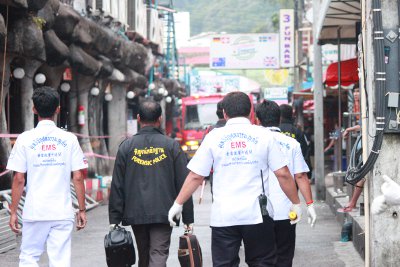 PHUKET: Forensics experts from Bangkok will be called in to assist Phuket officers in their investigation into what caused the deadly inferno at Tiger Discotheque on Patong’s Soi Bangla early this morning.

The blaze, which claimed the lives of four people, may have started as a result of an electrical fault inside the building.

Events inside the nightclub seem to have followed the “power-up” of the main electricity transformer outside the building, which had exploded earlier plunging the whole area into darkness.

Phuket Provincial Police Commander Chonasit Wattanavrangkul told the Phuket Gazette this morning that he is focusing the investigation on two main areas of concern.

Firstly, the exact cause of the fire which is currently thought to be an electrical fault; and secondly, were modifications to extend the building legally approved and carried out according to building regulations.

“We are now in the process of trying to identify the four people who perished in the fire. We are expecting the arrival of a forensics team from Bangkok today to assist us in this task.” Maj Gen Chonasit said.

Kanyaporn Kantong , 25, from Sisaket province in Northeastern Thailand, told reporters that she was with three friends in the nightclub when the fire broke out.

“We were sitting at a table drinking when someone shouted ‘Fire! Fire!’. Nobody moved as we didn’t believe it.

“Then we saw sparks and smoke coming from the area behind the bar counter followed by lights falling from the ceiling… Then we ran for the exit.

“Although I made it to the exit, I couldn’t get out as so many people, who were also trying to escape, were jammed together.”

It was at that point that Ms Kanyaporn realized her shirt was on fire. Luckily she was saved from burns by a mystery foreigner who put out the flames.

“I didn’t get burned but in the panic someone pushed me down the stairs. I fell injuring my foot,” she said.

Thamrongsak Boonrak, legal counsel for the Tiger Group of entertainment businesses in Patong, told the Gazette that all victims of the fire will be fully compensated.

“The company will cover the medical expenses of those who are injured. We will also look into some form of compensation concerning those who died.

“This is a most regrettable accident, the cost of which could run into hundreds of millions of baht,” Mr Thamrongsak said.

“Whether or not the building can be salvaged we will have to let the experts decide. We will go with any decision they make,” he added.