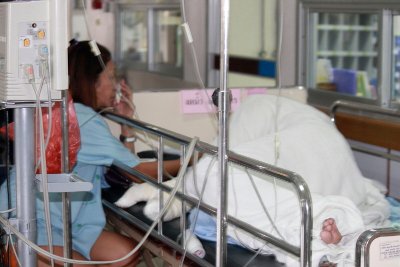 PHUKET: Staff at the Tiger Discotheque in Patong initially thought the sound of an exploding transformer was a bomb, which caused people to panic and stampede towards the door when fire broke out at the Phuket venue early this morning. Four people were killed and at least 12 others injured, according to officials.

Thamrongsak Boonrak, Legal Counsel for Tiger Discotheque, told the Phuket Gazette this morning: “The cause of the fire is still under investigation, but I have been told that lightning struck a transformer. The power shut down and came back on three times before staff heard an explosion. At first they thought it was a bomb.”

“People panicked and ran. Then a fire broke out and people started choking on the smoke. People stampeded for the exits, trampling one another as they ran for the doors,” he said.

Mr Thamrongsak assured that the club owners will compensate victims caught in the fire, as well as their families.

“The club is insured. Compensation will be paid in full for the people who were injured and the families of the those who died in this tragedy.”

“We are not going to deny any responsibility. We will not let this affect Thailand’s reputation as a tourism destination. We have already arranged to cover medical expenses at the hospital,” he said.

Mr Thamrongsak said he was not sure of the total cost of property damage at this stage.

As legal counsel for the Tiger Group of entertainment companies that operate in Patong, Mr Thamrongsak added that the nightclub building complied with all building regulations.

However, he added, “I don’t think the building can be used anymore. We will have to talk to the owner, as we rent the premises.”

“I will talk with Patong Municipality. If they say the building must be pulled down, we will ask the owner to do it. We would not risk public safety by re-opening [the club] in a building with structural damage by fire.”

Asked why patrons were still inside the nightclub at 4am, Mr Thamrongsak replied, “Heavy rain started to fall at about 1am, the time we usually close. That’s why people did not want to leave the club.

“It was still packed when the fire broke out [at 4am],” he said.

For more photos of the fire and the rescue effort, click here.