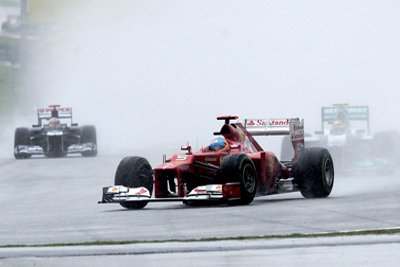 PHUKET: The season is half way through, everyone is taking the half-term holiday and it’s time to look at where the teams and drivers are.

Red Bull gets a B. They have had many solid performances, but there are suspicions of cheating in tests in a car that is now off the pace. They have certainly pushed the regulations to the limit, and are in a constant firefight with the other teams.

At Hockenheim they used an engine mapping system that stayed within the letter of the FIA Regulations but broke its spirit. The law was changed, and Red Bull was slower at Hungaroring.

Now they have a button that can change the car’s ride height. It is illegal to use such a button under Fédération Internationale de l’Automobile (FIA) regulations. Red Bull says it has never used the button, but the FIA has no way of knowing if this is true. But why install the button if you are never going to use it?

Vettel and Webber both get a B, reflecting the car more than the drivers. Webber is less exciting but Vettel seems so immature that he is sometimes an embarrassment. But Vettel is the only one that Red Bull desperately wants to win. There is a rumor that Daniel Ricciardo of Torro Rosso was prevented from taking his final run in Q1 at Hungaroring because he could have knocked Vettel out of Q2.

Team Ferrari gets a C+. It’s an unexceptional car with unexceptional strategies. But Alonso with an A+ is the boy most likely to succeed. He makes a second rate Ferrari look first rate. Massa gets an F. It is a pity, but he has failed. There is surely no way he will stay on the team, and no other big team will want him, so I think it’s rustication for Felipe. Why on earth would Ferrari want to keep him? Heikki Kovalainen of Caterham is the man attracting a lot of attention, as is Perez.

McLaren gets a C+. The car started well, and there have been enough upgrades to make it competitive again. The pit crew has been dreadful but now looks much better. Lewis Hamilton scores a B+. Even with dreadful luck and inadequate technical support he still has the chance to come top of the class. But he has to take 5 points off Alonso each race. Jensen Button scores a D+ and is now out of contention for the championship.

Lotus gets a C+. It is now racing McLaren on equal terms. If it had not been impossible to overtake at the Hungaroring, they might have done even better there. Kimi Räikkönen gets a B+, and like Hamilton could yet end up top of the class if he can gain 5 points a race on Alonso. Grosjean gets a D+, not bad for a rookie, but he will not win the championship.

Mercedes scores only a D+ but Rosberg gets a C+ and Schumacher gets an F+. It’s starting to look like Schumie should hang up his gloves. Sauber scores a D, with Perez scoring the same, and Kobayashi scoring an F+.

Williams and Force India and their drivers all score an E. Everyone else gets an F.

Williams’s Pastor Maldonado is getting the reputation of being the naughty boy of the class, and is getting punished for it. He will need some nice non-aggressive races to get a decent reputation with the prefects again.

So Spa is going to be a great test, but more on that nearer to the time. We are set for a great second half.

All Formula one races are shown live at The GreenMan. Click here for more information.