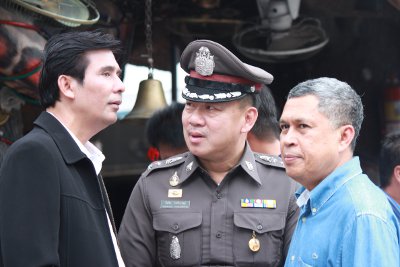 PHUKET: After inspecting the gutted remains of the Tiger Discotheque over the weekend, Government Spokesman Prompong Nopparit has called for increased safety measures at all 198 registered bars, pubs and other nightlife venues registered in Patong.

“An examination of Tiger Discotheque reveals that the building construction itself was a problem. Its walls were made from a flammable foam material. Other fixtures made of cement-coated steel were no problem,” he said.

“I will research which measures to take to prevent fires in the future. I have already coordinated with Phuket Governor Tri Augkaradacha to set up security measures. We will work with both provincial and Patong Municipality officers so that there is never a repeat of what happened here,” Mr Prompong said.

“These would likely include structural restrictions, such as a ban on flammable construction items, such as foam, as well as more and better-marked fire exits, alarms, and more fire-extinguishing equipment. The budget [for this] will probably come from the Provincial Office,” he said.

Mr Prompong said there were reportedly about 800 people in the disco when the fire broke out, the vast majority managing to escape unharmed.

He dismissed reports about the bar remaining open past the 2am closing time as hearsay.

“As far as I know, the venue had been closed since 2am, but it was raining hard so people were stuck inside. Also I have information that there are no bars in the area staying open past [the designated] closing time. I would not accuse them without any proof,” he said.