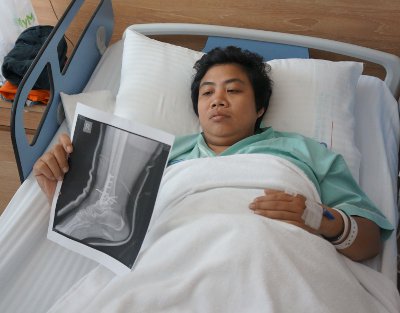 PHUKET: The Phuket Governor and his wife this morning visited a survivor of the Tiger Discotheque fire, who gave the press a first-hand account of how she leaped from the blazing nightspot, breaking an ankle in order to save her life.

After the visit, the governor revealed that the Patong Police are now under investigation for neglect of duty for allegedly allowing nightlife venues to remain open past designated closing times.

The survivor, 32-year-old Suree Deeying, was presented with a gift basket by Governor Tri Augkaradacha and his wife Nalinee as Ms Suree lay in her bed at Bangkok Phuket Hospital this morning.

After thanking the Governor and his wife, who chairs the Phuket Chapter of the Phuket Red Cross Society, the Tiger Discotheque employee gave her account of the events of 4am last Friday.

“I was working behind the bar on the second floor. When the fire broke out, the pub had already closed, but there were still some people inside. We had already stopped selling drinks at that time and I was preparing to close up the bar. All of a sudden I heard someone yell, ‘Fire! Fire!’ Then I looked up and saw flames all over the place,” she said.

“There are many fire exits from the second floor. So I ran out through one of them, but I was so afraid that the flames would get me, that I jumped off the staircase and landed on the ground.

“As I tried to run away, I realized that my right foot was broken. I was taken to Patong Hospital [by a good citizen] even before any ambulances arrived. The owner of Tiger Group paid for my transfer to Bangkok Hospital and my treatment here,” said Miss Suree.

She showed the press an x-ray image of her badly broken right ankle, which has already undergone reconstructive surgery.

“I am not sure how long I have to stay here, but I am feeling good overall. I will get back to work as soon as I fully recover,” said Miss Suree.

When Miss Suree does return to work, it will likely have to be at another Tiger Group venue.

“Since the fire at Tiger Disco on Friday morning, the area has been declared a disaster. We will not allow anyone into that area without permission. I have ordered the Phuket Office of Public Works and Town & Country Planning to determine whether the building is still structurally sound,” said Gov Tri.

“The Forensic Police office in Phuket has already inspected the site, but they have not yet confirmed the actual cause of fire to us. I will have to discuss the issue with Provincial Police Commander Chonasit Wattanavrangkul later today. He will give me a full briefing about the investigation.

“We will get all the facts sorted out, especially regarding the opening hours of this pub. We have to find out if they were operating past the designated closing time or not,” Gov Tri said.

As highlighted by top-level building inspectors earlier, foam-based building materials used to construct the walls of the venue appear to have been a key factor in the rapid spread of the fire.

“We will have to check why the Tiger Discotheque was allowed to use foam-based materials as part of the construction since it is a flammable material. I have to check with Patong Municipality office about the design of the discotheque, because they are the ones who signed the permits for the structure and its extension,” said the governor.

“I inspected this pub once a long time ago, before they did the extension [work]. At that time, they seemed to be following all the rules and regulations regarding construction, but I am not sure about the extension; we will have to check with Patong Municipality first,” he added.

Governor Tri has ordered all entertainment venues throughout Phuket to be inspected after the tragedy, which claimed the lives of at least four and left at least 12 others injured.

“This may sound like a case of ‘closing the stable door after the horse has bolted’, but we now have to check with all of the entertainment venues to see whether they comply with all rules and regulations. I will ask all local administrations of all areas in Phuket – especially Patong, Karon, and Phuket Town – to check the entertainment venues in their jurisdictions,” he said.

“We launched a pilot project called ‘White Entertainment Venues’ in the Phuket Town area even before the fire happened. This project now will be put into effect throughout Phuket. I want to ensure that all entertainment venues on the island are safe and following all rules and regulations,” Gov Tri warned.

“The Phuket Provincial Office has assigned a committee to investigate whether or not Patong Police are neglecting their duty by allowing night entertainment venues to open past designated closing times. We hope we can get their findings in a few days,” he added.

“The rules and regulations are already in place. Now it’s up to people who have the authority to be more strict about law enforcement.

“After the incident happened, there was wide-scale international media coverage, and [there were] many reports that Phuket entertainment venues do not have good safety standards. I have to say that it is not true. We inspect all entertainment venues on a regular basis to ensure that all of them follow all rules and regulations,” he said.

“It may take awhile before we regain [tourists’] confidence, but I want to confirm that the safety of both tourists and local residents is our top priority,” he said.

“The owner of Tiger Group has promised to help with the medical expenses for all injured people. If the help is not enough, I will offer the help myself to ensure that everyone gets proper medical treatment,” Gov Tri said.