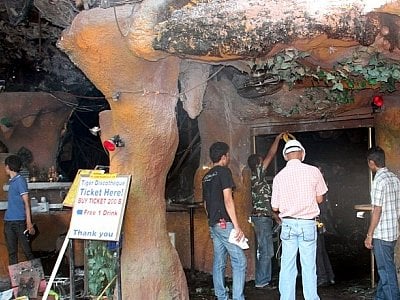 PHUKET: The highly flammable polystyrene foam used in making the Tiger Discotheque’s iconic decorations has been named by building inspectors as one of many possible fire hazards that contributed to the deadly fire last Friday.

The news came yesterday as officers from the Department of Public Works and Town and Country Planning, the Association of Siamese Architects Under Royal Patronage (ASA), and the Building Safety Inspectors and Office Association (BSA) inspected the gutted remains of the building.

“The decorations on the second floor were made from polystyrene foam, which is similar to what was used in the Santika pub,” said Pol Lt Col Bundit Pradubsuk, chairman of the ASA’s Security Architecture Committee.

The Santika pub in Bangkok suffered a devastating fire on New Year’s Eve 2009, when a blaze swept through the nightclub, killing 66 people and injuring 222 others. The ASA and the BSA were involved in investigating the tragedy.

BSA Vice President Wasawat Kritsiritirapak yesterday explained that, following the Santika fire, new regulations were put in place this year to restrict the use of such highly flammable materials inside buildings.

Mr Wasawat called for action to be taken to enforce the new regulation. “It is necessary to have entertainment venue owners across the nation make the changes in order to fall in line with the new regulation,” he said.

Lt Col Bundit said that the Tiger Discotheque had eight fire exits with signs, which was within the required limits. The investigation team also measured the width of the fire-escape ladders, and found that those too met with regulations.

However, the inspection team will recommend that the building be torn down, but that the bars on the ground-floor level can stay.

Mr Wasawat explained that the entire nightclub was severely damaged by the fire.

“I don’t think the building can be used any more,” he said.

Mr Wasawat added that the inspection team had yet to confirm whether or not the elevated mezzanine sections inside the club were approved additions marked on the structural plan.

“The information we have collected will be handed to the police and used in making recommendations for changes to the Building Control Act,” he added.