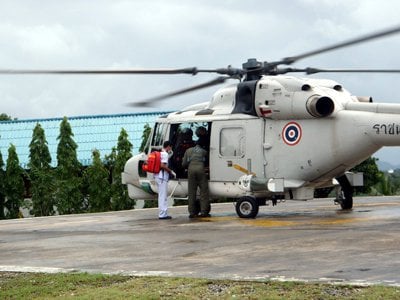 PHUKET: The Chinese snorkeler who was found face-down and unconscious in the water off Koh Racha Yai, just one day after the Royal Thai Navy opened a helipad at Koh Racha Yai, is recovering well.

The facility was used to airlift the unconscious Chinese tourist back to the main island for emergency medical treatment.

The Third Naval Area Command received the emergency call on July 7. The Chinese tourist was found floating unconscious in the waters of Ao La, a popular snorkeling destination off the east coast of Koh Racha Yai.

The tourist, Mrs Jin Giuping, was found floating face down by her husband, Mr Zhenshuguang.

“The couple went snorkeling at Koh Racha Yai with a tour company. While they were snorkeling, Mr Zhenshuguang noticed that his wife had been face down in the water for a long time. He informed the tour guide, who discovered that she was unconscious,” explained Capt Kritsada Rattanasupa of the Navy’s Phuket Internal Security Operations Command.

“Once they got in contact with the Third Naval Area Command for help, we dispatched a helicopter to bring her back to Phuket,” he said.

With the brand new helipad and almost immediate availability of a helicopter, Navy staff were fortunately prepared to rush the critically-injured tourist back to the Phuket, he said.

“We built the heliport on the island to assist with disasters at sea, as well as for tourists needing to be sent back to Phuket in emergency cases just like this one,” said Capt Kritsada.

After arriving on Phuket, Mrs Jin Giuping was immediately transferred to the intensive care unit (ICU) at Vachira Phuket Hospital in Phuket Town.

According to Vachira Phuket Hospital Director Doctor Jetsada Jongpaiboonpattana, Mrs Jin Giuping is recovering and is no longer in the ICU, but is still under close observation.

“Mrs Jin Giuping is conscious though no longer in ICU, however she is still under observation. She is getting better, walking and is now able to speak,” a staff member from Vachira Phuket Hospital said.

The hospital is unsure when Mrs Giuping will be well enough to be released and return home.

Three more suspects in custody for shooting of Phuket cop