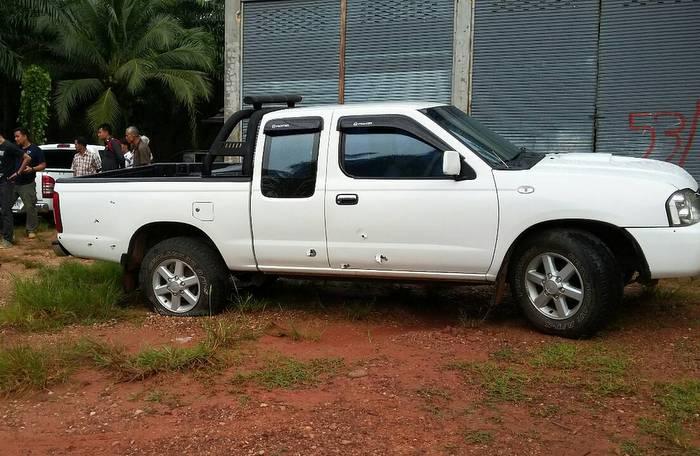 KRABI: One police officer and two other people were killed when they attempted to evict a group of squatters from a heavily-disputed, 8,200-rai oil palm plantation in Krabi on Tuesday.

The men were named as 45-year-old Payaprasit Suvannman of the Thungsong Police in Nakhorn Sri Thammarat; Veerasak Kuekaew, 50; and Preecha Kuedam, 44. A fourth man found at the scene, Pongmit Kalong was injured, but managed to escape into the plantation alive.

“The bodies of the three men were riddled with gun shot wounds, while Mr Pongmit had only been shot in the leg,” said Lt Attawut Pankong of the Khao Phnom Police.

A team of six men armed with an eviction notice approached the squatters in two pick-up trucks on Tuesday, explained Lt Attawut.

In addition to the men who were killed and the one who was injured, 50-year-old Chaiyot Rodkaew, a lawyer and the directer of Uang Sau Oilpalm Agricultural Co Ltd, was present. Police declined to name the sixth man, fearing that doing so could make him a target of further violence.

The concession for Uang Sau Oilpalm Agricultural Co Ltd to use the vast plot of land ended in September. However, an extension had given Mr Chaiyot the rights of land-use for an additional three months.

“Sompong Chingchoo had moved on to the property with a number of workers even before the concession expired in September,” explained Lt Attawut.

“Only four of the six men who had arrived with Mr Chaiyot approached the group of workers and attempted to negotiate. However, the negations failed, and the workers opened fire, as Mr Chaiyot and the other man escaped in separate trucks.

“They were forced to ditch both of the trucks, which were heavily damaged by the gunfire, about one kilometer from the scene of the crime. However, there were able to call for help and get picked up in a third truck.”

“They presented themselves, as well as a shot gun, two 9mm hand guns, one 11mm handgun and matching ammunition,” explained Khao Phanom Police Superintendent Somdet Sokkarn. “The four confessed to killing the men, but said they did so in self-defence.”

The men told police that Mr Chaiyot’s team had threatened them with violence a number of times before, so when one of his men drew a gun on Tuesday, the workers responded by opening fire.

Police charged the four men for the slayings, as well as the illegal possession of firearms.

“The ownership and usage rights for this property is very complicated. There are more than 100 complaints filed with regards to this land,” explained Col Somdet.