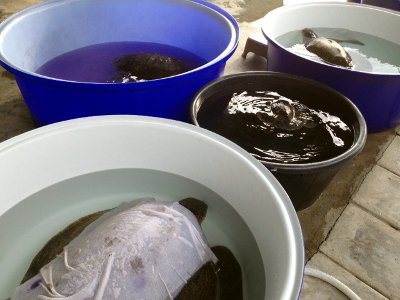 PHUKET: Another three young Olive Ridley sea turtles were discovered washed up on Phuket beaches yesterday. All were missing limbs, presumed to have been severed by discarded fishing nets.

Dr Kongkiat Kittiwattanawong, who heads the Endangered Species Unit at the Phuket Marine Biological Center (PMBC), told the Phuket Gazette that the turtles were discovered by local residents and lifeguards at Kata Beach and Yanui Beach, in the south of Phuket, and at Surin Beach further north.

“The three turtles had flippers cut off by fishing nets. We have provided some initial treatment for their injuries. One of them is a female, but the rest two are too young to identify their gender,” said Dr Kongkiat.

“The three turtles bring the total number of injured ones that have washed ashore local beaches since July to 40. All are now in our care to 40. All of them are Olive Ridley turtles. Most of them are disabled,” Dr Kongkiat added.