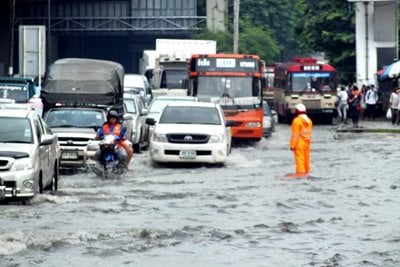 PHUKET: The Bangkok Metropolitan Administration (BMA) yesterday insisted that rainfall in the capital this month has been the highest in 100 years.

“I have clear information,” said Sanya Sheenimit in his capacity as chief of BMA’s Drainage and Sewerage Department. He added that the total rainfall in the capital had reached 825.5 millimetres.

Sanya went on to say he had already cleared up misunderstandings with the Meteorological Department’s deputy director general, Somchai Baimuang, who questioned BMA rainfall records on Thursday.

Somchai reckoned that the BMA might have used statistical methods in determining the average rainfall figures for the 100-year period. “However, at the Meteorological Department, we use raw data and our database can only go back 30 to 50 years,” he said.

According to Somchai, rain levels should be based on data compiled at one measuring station.

“The BMA should also clearly release information as to where and how the rainfall is measured,” he said.

Somchai appeared reluctant to believe that the capital was experiencing the heaviest rainfall in 100 years, because data compiled by his department is still very different from figures released by the BMA.

He said the rainfall levels measured at the Meteorological Department’s stations in Sukhumvit and Bang Na on September 25 were by no means above average.

The BMA has been blaming heavy downpours for flooding on several major roads, including the Vibhavadi-Rangsit Road.

Chawalit Chantararat, executive director of the water-management experts, TEAM Group, said it takes time for rainwater to drain in the capital.

Nong Chok District Office director Pinyo Pinkaeo said rainfall in his area on Thursday night stood at 147mm and despite determined drainage efforts, some spots were still inundated. “But the situation will return to normal if there is no more rain,” he said.

Meanwhile, BMA spokesman Wasan Meewong has called on all sides to stop finding fault with the city administration.

“They should be working with us to help solve problems,” he said.

Metropolitan Police Commissioner Lt-General Khamronwit Toopkrajang said that after a crew of inmates from the Corrections Department dredged drainage pipes, rain-induced flooding time had been cut down from three hours to just one hour in many spots in Bangkok.

Several portions of Phaholyothin Road in Pathum Thani were also under 40 to 50 centimetres of water yesterday following a cloudburst on Thursday night, which brought traffic to a standstill.

Meanwhile, Ranong Disaster Prevention and Mitigation Office yesterday issued an urgent warning for people living at foothills or sloping areas in Muang Ranong, La-un and Suk Samran districts to beware of possible landslides. “Ranong is still under the influence of a low-pressure ridge, which can send big downpours to many areas,” the office’s director Chaowalit Nitararat said.

The weather forecast for Phuket over the weekend is mixed clouds and sun with scattered thunderstorms.

Wave heights in the region are expected to be two meters today, and reducing to 1-2 meters tomorrow, which should provide welcome relief to the organizers of the Go Eco Phuket reef cleanup.