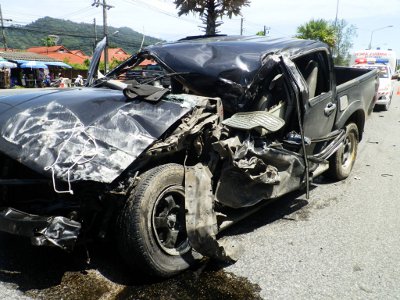 PHUKET: A 19-year-old man escaped serious injury when the Isuzu pickup he was driving slammed into an 18-wheeled truck and trailer on Thepkrasattri Road in the north of Phuket this afternoon.

Kusoldharm Foundation rescue workers removed him from the vehicle and took him to Thalang Hospital, where he was treated for minor injuries to his left wrist and cuts to his face from broken glass.

Police told the Phuket Gazette that Mr Ken was reportedly cut off by the 18-wheeler as it made a sudden u-turn in front of him, leaving Mr Ken no option other than crash into the truck.

Police are still searching for the driver of the 18-wheeler, which reportedly had no goods on its flat-bed trailer at the time of the accident.

The velocity of the pickup at the point of impact was not reported.