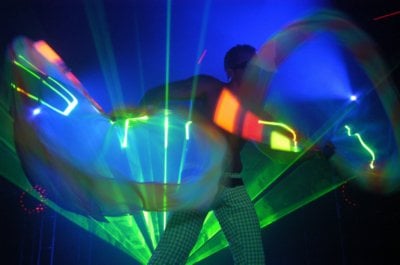 KATA-KARON: After six ground-breaking Nation parties – four in Singapore and two in Phuket – the gay and lesbian portal Fridae.com drew the curtains in Phuket when the last track of the three-day event, spun by Australian DJ Kate Monroe, trailed off into cheers at around 8 am this morning at the Hilton Arcadia Phuket Resort & Spa.

The 1,500-plus revelers, many from Thailand, but hundreds more from Singapore, Hong Kong, Taiwan, Australia, Europe and the US enjoyed an almost continuous three days of partying with top-ranked DJs such as Monroe as well as De Leon and the legendary Tony Moran.

The Nation parties began in 2001, and enjoyed increasing numbers of guests and a surprising level of tolerance from the Singaporean authorities until last year, when the extravaganza was denied a license.

Fridae.com brought the event to Phuket, and although numbers were, naturally, down on the preceding year’s 8,000 partygoers, many did attend, giving the island a welcome boost after the tsunami.

In a recent interview with the Gazette, Dr Stuart Koe, CEO of Fridae, said “”Now, there are now a number of impressive party organizers in the region – it is time for Fridae to focus on empowering the Asian gay community through other means.”

Comments from partygoers were, although tinged with an element of sadness that the Nation parties are over, were generally upbeat.

“Sure, Fridae’s not going to be organizing these parties [in Thailand or elsewhere] anymore, but someone else will,” said “Fitz” from Hong Kong.

“There are enough people paying good money to be here – more people than you’d get at any other event except for a major concert or football match – to make it worthwhile. The question is: will someone keep the momentum going, or will it just go flat?”

Tuk tuk, taxi drivers to get crash course in English

Another man gunned down