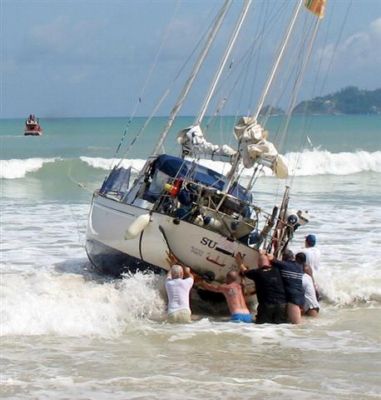 PATONG: Eleven days after the 38-foot sailboat Sultan beached at the south end of Patong during a storm, salvage efforts at high tide around midday yesterday finally saw her afloat and sailing for safer waters.

Sultan made landfall on Patong Beach about 1 am on June 19 after its anchor chain snapped during strong winds and large waves in Patong Bay.

Skipper Michael Wilson, awakened by the crash, had just reached Patong after a perilous 17-day solo sail from Sri Lanka.

More than 10 days after it washed ashore, Sultan remained lodged in the sand despite several efforts to refloat her. It had become a major talking point in Patong, with tourists posing next to it when taking photos.

During the week the cash-strapped skipper put a sign outside the boat asking for donations to help in the effort to refloat the vessel.

Speaking to the Gazette on Friday, before Sultan was refloated, Mr Wilson said:

“With all the help in the world I hope we can get her clear off and get her to [a shipyard] so I can repair her, and then I can sit and make a decision about what to do next.

“Once I’ve repaired the boat I will have to weigh the situation. If I have to sell her then I will have to go back to my country by plane. I have owned my boat for six and a half years. If I lose this boat then I’ve lost everything. That’s what she means to me. When you’ve lived and sailed with a boat you become as one with it. My boat is my life – I love her,” he said.

“It hurts me to see my boat like this. It also hurts me to be hurting your holiday trade. I’m only one person. The people here are helping me, but manpower alone will not do this. We need some form of boat out there to help. We have tried. We’ve literally turned her three times – three times we’ve come that close,” he explained.

“I had 50 strong people: Australians, New Zealanders, English – everybody was there trying to help. The speedboat people stopped work and they came in and helped, too. But manpower alone failed.

“When we tried to get her out, the waves were really big and too strong. These people can only do so much. I felt it was getting too dangerous,” he added.

“I would like to thank everybody who has helped. I really do appreciate it. The Thai people have been extremely nice. They’ve tried to help as much as they possibly can and they are still in the process of trying to help me.

“I would like to apologize to the Thai government and the Thai people if I’ve insulted them by saying that my anchor chain was cut. I hope that people understand that I was very tired and shocked and it was the first thing that came in to my mind. I apologize with all my heart,” Mr Wilson said.